Women have been playing an important role in the economy of Manipur from times immemorial and many historical evidences have proved the courage and capability of Manipuri women in different aspects of the economy. A surge in the number of women entrepreneurs is witnessing in the State during the past few years. Many women have become successful entrepreneurs in their fields. Among them is Moirangthem Muktamani Devi who has been honoured with India’s fourth highest Civilian Award of this year in Trade and Industry category by the Government of India.

Moirangthem Muktamani Devi hails from Kakching Moirangthem Leikai in Kakching district of Manipur. She was born on 15th December, 1960 as the third child to Moirangthem Cheiteinya Singh and Moirangthem Ongbi Tomchoubi Devi at Kakching Phousupat Leikai in Kakching district of Manipur. She is wife of Kshetrimayum Naran Singh and a mother of four children. Muktamani did her schooling from Kakching Girls’ High School, Kakching. She did passed her matriculation after her marriage from the same school and twelfth standard from Kha Manipur College, Kakching.

In an exclusive interview with Moirangthem Muktamani Devi, she expressed that she had faced so many hardship in her journey of entrepreneurship with many challenges and stigmas. With all odds she started her journey of life with full of courage and sacrifice to be in this present status. Many obstacles and even threats had appeared to quit her profession of making shoes but she never got disappointed. Even many misunderstanding occurs with her husband when she started her venture. Instead she got more courage from all those hurdles and converted it an opportunity to be a successful entrepreneur, she added.

Before turning into the profession of Shoe maker, Muktamani earned her living engaging in agricultural works such as paddy plantation and others along with her aunties of the locality. At night she started making woollen caps and shocks which she learnt from her sister-in-law to earn her living. She sells her products at her locality. She starts selling the cap at Rs. 3 (three) per piece and pair of shocks at Rs3.50. During the off season of agriculture she started thinking of doing some work which could support her family. Muktamani recalling an incident that motivates her mind narrated that as she could not pay even two or three rupees for mending her daughter’s school shoes, she made a pair of woollen knitted shoes of green and white in colour.  It was told that at the school assembly, her daughter cried a lot thinking that she would be punished by the School authority for not wearing the school uniform shoes which is black in colour. Instead of punishment, her daughter received appreciation for the new and creative work of the awardee and even got an order for a black pair of shoes by the school teacher for her daughter. This provides Muktamani an idea to proceed herself in the profession of making len knitted shoes.

As to start her new venture she seeks the required knowledge for making a shoe from a non-local cobbler at her locality. First she asked the cobbler to cut the sole of the shoe and asked from where to get the required raw materials for making a shoe. With new creative and innovative ideas, Muktamani started producing different designs of shoes for both women and men. Now she could produce more than 20 designs of shoes. The uniqueness of her shoes is hand-made woollen knitted, washable, everlasting and stinky free. It takes two days for making a female shoes and 3 to 4 days for a male shoe. The price starts from Rs 700 for a female shoe and Rs 900 for a male shoe. Her product is also available online. It is exported to Dubai, America, Australia, Japan, Mexico, Korea etc. She has given training of shoe making to more than 2000 women. Still there is heavy demand of her shoes across the globe. Even during the COVID-19 pandemic period, her co-workers work from their homes in order to meet the demands of the customers.

On receiving the Padma Shri award, she narrated that she did not apply for the award. But there was police inquiry, and inquiries from other departments of Kakching district. Even the Deputy Commissioner of Kakching asked for her bio-data, relevant documents, photos, videos, contact number, etc. It was on 25th January 2022 at 1.15pm there was verification call from the Central Government authority. At 8pm she received a PDF file of the list of the Padma Shri Awardee of the year 2022. She found her name in the 54th list of all the awardees. She felt so excited to hear the news, even she cried out of happiness. She thanked God for showing the good result of her hard works. She gives the credit of the award to the Government of India for recognizing and loving the skills as a part empowering women. She also extends her credit to one and all that help her in her hard times.

Her enterprise had been registered as Mukta Shoes Industries in the year 1989. With the help of her brother Mayanglambam Sushil Kumar, IPS officer the then Superintendent of Police (Jail), Muktamani could sold her products to many officers of different departments. Her brother Sushil made her possible to make her shoes reach many prominent personalities and leaders of the country. Among them are Dr APJ Abdul Kalam, Pranab Mukherjee, and Oscar Fernandez etc. The Governors of Manipur- Najma Heptulla, O. N. Srivasatava, Chintamani Panigrahi, Shivinder Singh Sidhu and many more wear Muktamani’s shoes, she added. 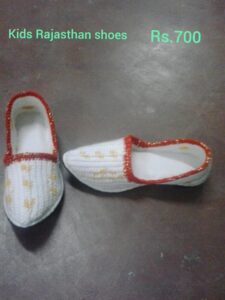 Mentioning about her future plan, Muktamani expressed that she wants to set up a work place where few hundreds of people could work together. She has a desire for producing more new designs of shoes and also to provide more employment particularly to the youths of the state. The awardee said the government needs to focus more on entrepreneurs by providing the required financial supports, guidelines and suggestions. She appeals the young budding entrepreneurs to go ahead with their journey with firm determination and dedication and to face all the challenges that come their way. When one performs her duty with hard work and sincerity, success is the ultimate goal to be achieved. With many more successful entrepreneurs coming up in the state will help in bringing a sound economy of the country by creating and providing more platforms for employability. This will make true the dream of Our Honourable Prime Minister Narendra Modi to make India a self-reliant Country.

KSH. CHITRABHANU DEVI
PrevPreviousRevisiting AFSPA 1958: A Colonial Law and its Misuse
NextRenewed Instinct of War Reveals Human’s Inability to Evolve as Moral Being Aside of Physical EvolutionNext