Millions of people across the globe celebrated International Yoga Day performing many yogaasnas. International yoga day is celebrated on June 21 every year. The theme of this year celebration was “Yoga for Humanity”. Yoga is essentially a spiritual discipline based on an extremely subtle science which brings harmony to both mind and body. It is an art as well as science of healthy living. It is a physical, mental and spiritual practice that originated in Ancient India. The word ‘Yoga’ is derived from the Sanskrit root ‘Yuj’ meaning ‘to join’ or ‘to yoke’ or ‘to unite’. The practice of Yoga is believed to have started with the dawn of civilization. The science of Yoga has its origin thousands of year ago long before the first religious or belief systems were born. 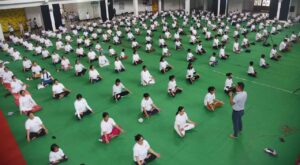 In contemporary times, everybody practices Yoga for preserving, maintaining and promoting their health. It has spread all over the world. Present days, Yoga education is being imparted in many Yoga Institutions, Yoga Colleges, Yoga universities, Yoga Department in the Universities, Naturopathy colleges and private trusts and societies. The idea of International Yoga Day was conceived by Prime Minister of India Narendra Modi. He proposed the concept on September 27, 2014 during his speech at the UN General Assembly. The draft resolution passed by India was supported by 177 nations. Recognizing its universal appeal and growing popularity, the United Nations proclaimed June 21 as the International Day of Yoga on December 11, 2014. Consequently, the first International Yoga Day was observed on June 21, 2015 in recognition of the benefits of the ancient Indian practice of Yoga. The high benefits of Yoga have made it a popular practice all over the world. Every year, people across the globe celebrate June 21 as International Yoga Day with great fervour.

Prime Minister Narendra Modi led the 8th edition of International Yoga Day 2022 in the Heritage City of Mysuru in front of the Iconic Place. On the occasion, the Prime Minister said Yoga is not for Indian alone, but for the entire humanity. The world has now realized the benefits of Yoga as it has provided a window to the spiritual growth of mankind. He called upon everyone to make Yoga a way of life. Yoga is a great problem solver, it can change our lifestyle. It helps to change our minds towards problem solving be it –climate change or international conflict, he added. During the celebration, around 15000 yoga performers performed yogaasnas along with the Prime Minister Narendra Modi. The Prime Minister in his tweet said that the beauty of Yoga is in its simplicity, it can be done at home, during work breaks or in a group. He has said that the importance of Yoga becomes even more in the present era when non-communicable and lifestyle related ailments are on the rise, particularly among the youths.

President Ram Nath Kovind in his tweet said that Yoga is a part of ancient Indian Heritage and India’s gift to humanity. Vice President M Venkaiah Naidu urged the people to make Yoga as part of their routine as it helps bringing peace and calm and helps all round development of individuals. He said only peace will bring development and Yoga is the main path to achieve the same.

The Central Government celebrated the International Yoga Day at 75 national-level iconic locations across the country focusing on Brand India in the Global stage while showcasing its iconic places. The government had designed special programmes for the specially-abled and transgender population, women and children. The Prime Minister’s award for outstanding contribution for promotion of Yoga 2021 will be received by Bhikkhu Sanghasena from Ladakh, Marcus Vinicius Rojo Rodrigues from Brazil and two organizations-The Divine Life Society from Uttarakhand and the British Wheel of Yoga from United Kingdom. The winners will be felicitated with a cash of 25 lakh rupees, a trophy and a certificate. The award was announced by the Prime Minister on the occasion of the second International Day of Yoga celebrations at Chandigarh in 2016.

Millions of people across India joined the world in celebrating the day with Yoga demonstrations in hundreds of city, towns and villages.  In Uttar Pradesh, lakhs of people participated in Yoga practice. First time grand Yoga session was organized on the banks of Saryu River in Ayodhya. In unique manner the day was celebrated in Varanasi where 75 boats were created the sign of number 75 on the bank of Ganga River and people practiced Yoga there. Manipur too joined the celebration of the day. The State level celebration was held at Khuman Lampak Indoor Stadium with mass yoga demonstrations. Speaking on the occasion state Chief Minister, N. Biren Singh said that Yoga had been a part of the Indian civilization since time immemorial. Yoga helps in building good relations among all the people regardless of caste and religion. It not only improves our immune system and self confidence but also helps in assimilating good and positive thoughts, he added. The Chief Minister appreciated the thoughts and vision of Prime Minister Narendra Modi for his initiative to achieve recognition of Yoga from the United Nations General Assembly. As one of the 75 iconic places of India for celebrating the International Yoga Day, the day was held at Loktak Lake, the largest freshwater lake in North East India.  The function was attended by Minister of State for Rural Development of North East Region (DoNER).  Over 500 people from different walks of life joined the Yoga demonstrations. The celebration was held at different places of the state with mass participation. When people can practice yoga everyday, it will have the true meaning of celebrating International Yoga Day. Everyday needs to be International Yoga Day. As practicing Yoga boosts the mental, physical and spiritual health, it will help in bringing peace to the universe. Making yoga a way of life will bring development with positive minds. Yoga is the only way for a better humanity. Lets’ practice Yoga everyday for a good mind and body for bringing peace and harmony and to avoid lifestyle related diseases.

KSH. CHITRABHANU DEVI
PrevPreviousWhy Plastics Are a Threat to Life and Manipur Must Fight to Overcome this Challenge
NextWhy Can’t The Manipur Government Adopt 1951 As Base Year For Determining Non-Idigenous Persons And Non-Permanent Residents Of Manipur?Next