What does rights of nature mean for development?

By Craig Kauffman, University of Oregon in Eugene

If a river has rights, does that mean farmers can no longer use the water to grow their crops?

As biologists gain a better picture of the world around us, views on who we are as humans on this planet are shifting. Ecology shows the world is actually not a collection of separate parts, but a set of nested systems that sustain life. Many Indigenous people would point out they have understood this for millennia and it has informed their customary law and practices.

But Western legal systems are only just beginning to bring a biological understanding of the world to the law. ‘Rights of nature’ is a legal idea that has gained interest since the 1970s. Recently, a push to recognise rights of nature has resulted in more than 300 legal initiatives across the world.

Rights of nature laws have implications for how we think about development. Most people agree that ‘sustainable development’ is a worthy goal. But there is plenty of disagreement on what development means and what exactly should be sustained. The way it is usually practiced seems to be about sustaining growth in our consumption of resources, while trying to minimise the negative consequences for the environment, human health, and the like. This approach is based on a worldview that sees humans as separate from the rest of the natural world and views the natural world as stocks of resources to produce economic wealth.

But economic growth is impossible forever, since we live on a finite planet. Instead, the rights of nature approach argues the goal should be sustaining the functioning of Earth’s systems and ecosystems that generate the conditions necessary for life.

Laws recognising the rights of ecosystems — like forests or rivers — to exist, regenerate their natural cycles, evolve naturally, and be restored when damaged, are meant to support this goal.

Around half of the US’s 50 states have no laws protecting the rights of nature at all, but other states have used a mix of legal instruments to recognise and enforce those rights.

The crucial thing about natural systems is they’re all connected. Humans and non-humans alike are interconnected in mutually dependent, reciprocal relationships: humans are not separate from nature. Human health and wellbeing is dependent on the health and wellbeing of the planet. Importantly, this means natural entities such as trees, rivers, soil, and animals are not independent stocks of resources that can be depleted without endangering the other entities in the system – including people.

Because rights of nature understands people are part of nature, there is no expectation people will not damage nature in the course of living. It is not like a conservation approach where nature is walled off from people. The goal is not for people to have no impact on the rest of the natural world – this is of course impossible. Rather, the goal is to require people to manage their behaviour in a way that allows natural systems to regenerate and evolve naturally.

At a superficial level, much economic activity would look the same if rights of nature were implemented more widely. People would still take from nature things they need to live (air, water, food, energy, medicine, building materials, etc.). However, rights of nature sees this as part of a reciprocal relationship. Since nature provides the conditions for life, it follows that people have obligations to nature as part of this relationship. Since ecosystems don’t accept cash payment, humans could ‘pay the bill’ by instead helping restore an ecosystem’s ability to regenerate its natural cycles. And people cannot exploit the ecosystem to the point it is permanently damaged or altered.

While it may sound odd to think of rivers holding water rights and selling water as property, this is conceptually no different than people selling their blood to blood banks, which is legal in some parts of the world. Legally, people are individuals. But biologically, the human body is an ecosystem that supports trillions of organisms. More specifically, people’s bodies are actually a collection of 11 interdependent systems (skeletal, muscular, nervous, etc.). 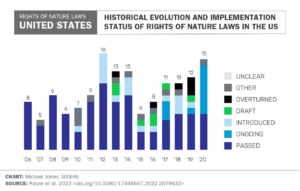 US legislatures have slowly but surely introduced new laws to protect the rights of nature over the past 15 years.

People are more than the sum of their parts; all the body’s systems must be functioning together for a person to live. In this sense people are very much like ecosystems like forests or river ecosystems. A blood bank may withdraw a limited amount of blood from a person’s system and buy it to use as they wish. In this instance, the blood is treated as property that is bought and sold (much like a river’s water might be). The blood (water) is not the legal person; the human being (river ecosystem) is. The human being is more than just their blood, just as a river ecosystem is more than just its water.

Because people are legal persons with rights, there is a limit to how much of a person’s blood a blood bank can withdraw. It cannot withdraw so much that the person’s systems stop functioning. If this happened, representatives of the blood bank would likely be charged with murder. Moreover, blood banks will typically give donors a glass of orange juice or something to replenish fluids and create new red blood cells in the body. There is a recognition of the obligation to help restore the person’s systems after inflicting some harm. The same logic applies in the case of ecosystems like watersheds having rights.

Rights of nature does not mean humans cannot still benefit from ecosystems, including by impacting them in ways that inflict limited harm. It means humans have the obligation to restore the health of the ecosystem, and people would be legally prohibited from polluting or extracting so much at one time that it prevents the ecosystem from functioning and regenerating.

Within a rights of nature framework, there is plenty of space for markets and economic activity. But it would look more like a circular economy than today’s economy based on infinite exponential growth in consumption and production. The goal of development would be improving human wellbeing, rather than consumption for consumption’s sake.

Craig Kauffman is Associate Professor of Political Science at the University of Oregon. He is the author of numerous articles and two books on ecological law, rights of nature, and sustainable development, including The Politics of Rights of Nature: Strategies for Building a More Sustainable Future (MIT Press 2021). Kauffman is also a member of the United Nations Knowledge Network on Harmony with Nature. This research was undertaken with the support of the Rockefeller Brothers Fund.