‘Vaidehi : Sita beyond Body’ – An Innovative Journey into Mithila Painting

Right when Delhites ensconced themselves safely from the famous Delhi heatwave, in the four walls of their cosy homes, I had the opportunity to visit the Mithila Painting exhibition hosted by the ‘Centre for Study of Traditions And Systems’ (CSTS) in collaboration with the IGNCA, new Delhi. The exhibitions were housed in two of its halls – Darshanam 1&2.

I must confess I was floored to behold the extraordinary burst of creative and aesthetic energy that met my eyes! It was inspiring and mesmerising to note that the Mithila paintings not only adorned the walls of Darshanam-1&2 but literally ‘owned’ INGCA right from the reception through aisle to the exhibition hall!

‘Vaidehi’ – Sita beyond the body, as the exhibition was called, and conceptualised by the young and dynamic Ms. Savita Jha Khan depicted Sita not just as she was in her physical form but in myriads of her ‘essences’ that enliven the mental space of Maithil women and inspire them in their own unending struggles of life!

I have seen the Maithil society from close quarters, and I must say that this conceptualisation exactly captures Mithila’s socialscape in a metaphor for scholastic discussions that took place from 10th May to 13th May as well as the painting exhibition that dovetailed.

What is amazing and praiseworthy is that the younger age group of artists were prolifically represented, most of whom were amateurs! That shows how young Maithils are still attached to their roots.

One could spot a lot of thematic as well as stylistic experimentations. For example, one of the painting depicted Vaidehi etching a ‘Sita Rekha’, – bringing in the feminist perspective of Women deciding their own conditions for living! Mithila Painting is possibly the oldest folk-art with various rules and regulations of stylistics. The background the border and the separation of various minitales within a larger narrative is achieved through interplay of straight and slightly curved tiny line -strokes. But I could see many young painters using colour fillings to achieve those effects. The colour combinations had a bit of novelty too. Like I saw the use of light aqua blue colour in one of the paintings. 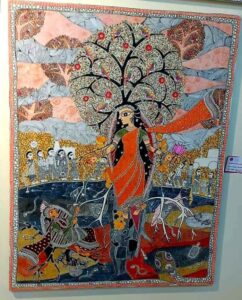 In contrast to them the more traditional painters first giving a light cow dung wash to the paper – just enough to treat it without spoiling the paper itself. The finished paintings had a more ‘classic’ look. The colours were vibrant Indian yellow, dark red & cyan/ teal colours.

Among the more traditional paintings-one could see volumes of paintings having ‘Tantric’ metaphors. There was even an effort to depict ‘Shakti’

as the prime mover behind the ‘Trimurti’ and not the other way round – wherein all Male gods collect their weapons together to form ‘ Shakti’ to fight demons. 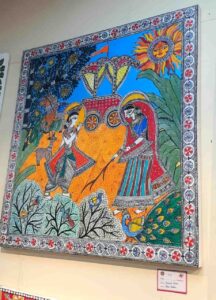 Mithilanchal is a land crisscrossed by rivers. And a lot of their cultural metaphors are driven by this water element. For example I saw numerous painting with ‘Meen’(fish) as the main thematic metaphor or even as the background – substituting the small curved line strokes which usually make the background. Its amazing to see miniscule fish each etched with different curve & character so painstakingly.

Painters also painted women as fish having a lions face! They purported to show the beauty and softness of women who stands guard to the family like Goddess Durga – symbolised as lion. I was reminded of a young Painter’s depiction of Vaidehi etching on earth a ‘Sita Rekha’. Indeed that can come from the traditions of Mithila where a lion faced Meen symbolises the beauty and valour of women.

The writer is a product of Delhi University. She has taught Political Science in Banaras Hindu University, Varanasi. Presently she is engaged in public policy advocacy, keeping a close eye on international affairs and women’s issues. She is deeply interested in India’s cultural landscape. Email: lataraman2000@gmail.com

2 thoughts on “‘Vaidehi : Sita beyond Body’ – An Innovative Journey into Mithila Painting”