The state CM consulted experts on fighting Covid-19 this week, even as a security personnel from the state died of Covid-19 during election duty in Guwahati. There is an appeal for ban on Koubru trekking to stop Covid-19, while 150 more ventilators have been received from the Union Ministry.

In view of the sudden upsurge in COVID-19 cases in the state in the past couple of days, Manipur Chief Minister Nongthombam Biren has sought expert opinion from medical experts, bureaucrats and police to effectively tackle the second wave of COVID-19 in a meeting held on April 29 at Imphal.

During the meeting, the chief minister assured the officials concerned that there would be no dearth of funds. He instructed them to acquire required equipment and engage manpower at the earliest and further asked them to increase Covid beds at hospitals and re-activate Covid Care Centres as soon as possible.

The CM also expressed the need to utilise the manpower of the Education department in assisting the officials of the Health department in suitable tasks like making enquiry about home isolation patients, reports added.

The Thadou Inpi Kangpokpi district has asked the Manipur government and the district administration to put a halt on trekking activities at Mt Koubru following detection of a trekker infected with the COVID-19.

Reports quoting Thadou Inpi Kangpokpi said that among those who trekked on Mt Koubru on April 27, a 23-year-old male from Khonghampat Awang Leikai has been tested positive on April 29 at CMC Korengei.

Thadou Inpi Kangpokpi further alleged that hundreds of trekkers on a daily basis had climbed Mt Koubru since April 21 completely flouting the covid SOPs and guidelines.

The Thadou Inpi Kangpokpi district said that the detection of positive case among the trekkers is a matter of concern for the public, adding that several appeals were made to avoid such unwanted Covid-related incidents but serious attention was not given, reports added.

The Thadou Inpi Kangpokpi also said that when the state is at an alarming situation, the scene at the peak of Mt Koubru looks as if a mammoth conference has been organised to convert the sacred peak as the hotbed for the dreaded COVID-19.

Manipur on April 29 received 150 more AgVa Ventilators from the Union Health Ministry. The ventilators, funded under the Prime Minister’s Citizen Assistance and Relief in Emergency Situations Fund (PM CARE) are both invasive and non-invasive with an inbuilt battery back-up for at least two hours.

Earlier, the Centre had supplied 90 ventilators to Manipur under the PM Cares Fund and have been placed at the Jawaharlal Nehru Institute of Medical Sciences (JNIMS), Porompat in Imphal. The CM has said that the ventilators will immensely help in the treatment of surging COVID-19 positive cases in the state, reports added.

Speaking on the occasion, he said the Centre had provided 400 oxygen concentrators for Manipur that are already installed. The Centre had also given 500 more D type oxygen cylinders for the state. With this, the state has now around 3,000 D type cylinders. Moreover, UNICEF has also provided two RT-PCR machines on April 28, he added.

A Jamandar from 6 Manipur Rifles who was part of the team deployed from Manipur for election security duties at Assam and West Bengal died of COVID-19 at Guwahati Medical College on April 29. 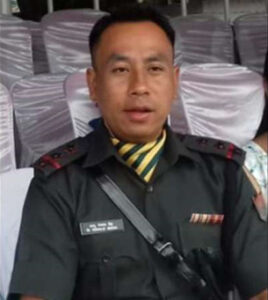 Reports said the deceased Jamandar Waikhom Ronald, 36, son of Ibohal from Thoubal Kshetri leikai is survived by his wife and two children.

After the end of elections in Assam, Ronald was travelling to West Bengal when he felt sick upon reaching Siliguri and returned to Guwahati on April 17.

Upon reaching Guwahati, Ronald went for a COVID-19 test so that he can travel back home to Manipur. Unfortunately, he tested positive for the viral infection and was duly admitted to Guwahati Medical College on April 20. Ronald was under treatment when he passed away around mid-afternoon on April 29.

12 in Custody for Assaulting Woman

The Chief Judicial Magistrate, Imphal West on April 28 remanded 12 individuals to seven-day police custody till May 4 in connection with a case of physical assault

The complainant Longjam Jibanlata Devi, 59, daughter of (L) L Iboton of Kakwa Huidrom Leikai lodged a complaint at the Singjamei Police Station that on April 27, Jibanlata went to the house of Naorem Sanatomba at Kakwa Naorem Leikai after being called by his wife Naorem Geetabali Devi for recovering a sum of Rs 8,50,000 which they borrowed from her around three years ago. Upon reaching Sanatomba’s house, a group of people consisting of both men and women led by Sanajaoba and others came towards her and dragged her and snatched her mobile phone away, reports added.

Her complaint alleged that they forcibly took her to Naorem Leikai Pena Khongba Community hall. In the hall, they physically assaulted her by pulling and kicking at her head and other parts of her body, and tried to undress her, it added.

Manipur CM Nongthombam Biren on April 26 visited the temporary Covid Care Centre in Imphal to review the COVID-19 cases in the state.

Reports said that the temporary centre at Indoor Hall of Bal Bhawan, Khuman Lampak was shut down in December 2020 after the recovery of the COVID-19 patients who were quarantined there. The centre will be reopened exclusively for women patients.

“Inspected the Covid Care Centre at Indoor Hall of Bal Bhawan, Khuman Lampak, for opening it again after it was closed down in December 2020. This CCC will be exclusively for women patients. Another Centre for male patients will be developed at the Youth Hostel at Khuman Lampak,” the CM tweeted.

The state government on April 29 declared the entire Greater Imphal area as containment zone for seven days with immediate effect suspending all activities and movement of persons, except the permitted activities.

The activities permitted during this period are moveme

All pharmacies including those selling veterinary medicines are permitted. All persons going COVID-19 vaccination, Covid testing and medical emergencies are also permitted, it stated. The order permitted all employees in Home, Health, Relief and DM, Police departments and district administration while mentioning that all other offices in the Greater Imphal Area are to remain closed.

Condemning the repeated blame being levelled at the teachers and authorities of RIMS by “Justice for Sanaton Athokpam (JFSA)”, RIMS Students’ Union (RIMSSU) on April 28 urged the JFSA and all concerned to refrain from tarnishing the image of RIMS with immediate effect.

alse accusations against the authorities, teachers or students is highly unfortunate.

The Police Department warned that those who violate the SOP shall be dealt with strong legal action under National Disaster Management Act, 2005 and other appropriate laws, reports added.

Ban on Oxygen for Non-Medical Use

District magistrate, Imphal West Naorem Praveen on April 30 issued an order to ban supply of oxygen for non-medical purposes, keeping in view of the rising cases of COVID-19 infection in Manipur and as a precautionary measure to avoid any shortages.

V.D.Savarkar – Protagonist of the Hindutva Doctrine and Seed of Today’s Polarised India

Abstract: In the currently charged socio-political climate of the country, it is necessary to understand the thoughts, ideas and doctrines of the propagator of Hindutva