Manipur’s weightlifter Saikhom Mirabai Chanu has opened India’s medals tally of Tokyo Olympics 2020 (held in 2021 due to COVID-19 pandemic) on July 24 as she has bagged a total of 202 kg silver medal in the Women’s 49kg category at Tokyo International Forum. Mirabai lifted a (87kg in snatch and 115kg in clean and jerk) during her four successful attempts across the competition.

The 26-year old bags silver medal ending India’s 21-year wait for a weightlifting medal at the Olympics. Mirabai lifted a total of 202kg (87kg+115kg) to better Karnam Malleswari’s bronze in the 2000 Sydney Olympics. This comes as a big achievement for Mirabai.

Mirabai took her time and cleanly heaved the barbell, attempting 84kg in her first snatch attempt. She then lifted 87kg in her next attempt and raised the weight to 89kg, which was one 1kg more than her personal best of 88kg that she had lifted at the national championship last year, reports added.

She had won the silver medal in the women’s 48 kg weight class at the 2014 Commonwealth Games, Glasgow; she went on to break the games record en route to the gold medal at the 2018 edition of the event held in Gold Coast. Her biggest achievement came in 2017, when she won the gold medal at World Weightlifting Championships held in Anaheim, United States.

Saikhom Mirabai Chanu was born on August 8, 1994 at Nongpok Kakching in Imphal East district, Manipur. Her family identified her strength from an early age when she was just 12.

A media team witnessed Mirabai’s family and close friends gathered together at her home and on hearing the news watching her match they cheered her and expressed immense happiness on her winning the medal.

The Supreme Court of India on July 19 and the High Court of Manipur on July 23 have released Manipur’s political activist Erendro Leichombam and journalist Kishorchandra Wangkhem who were detained under National Security Act (ACT) since May 17 over a Facebook post that stated “cow dung and cow urine won’t cure Covid” following a BJP’s leader’s death.

Erendro Leichombam was arrested along with a journalist Kishorchandra Wangkhem from their houses on May 13 based on an FIR lodged by Manipur state BJP vice-president Usham Deben and general secretary P Premananda Meetei.

Following the death of Manipur BJP president Saikhom Tikendra, who succumbed to the virus on the evening of May 13, the duo had stated in their Facebook posts that cow urine and cow dung were no cures for COVID-19.

A bench of Justice D Y Chandrachud and M R Shah has ordered to release him before 5 pm on July 19, after hearing arguments by advocate Shadan Farasat. The activist’s father L Raghumani Singh had filed a petition in the court, arguing that the NSA was only invoked to defeat the bail earlier granted to Erendro.

Following the release of political activist Erendro Leichombam who was booked under the same charges by an order from the Supreme Court, Elangbam Ranjita, wife of detained journalist Kishorchandra Wangkhem, in a letter to the High Court of Manipur on July 21 demanded the immediate release of his husband, who has been arrested under the National Security Act (NSA) over a Facebook post.

A division bench of the High Court of Manipur comprising Chief Justice PV Sanjay Kumar and Justice Kh Nobin Singh on July 23 ordered to release Kishorchandra on or before 5pm of the day.

In the order, Chief Justice PV Sanjay Kumar and Justice Kh Nobin Singh observed that “On the face of it, we find no distinction or difference between the case of the petitioner’s husband and that of Erendro Leichombam. Both of them put up similar Facebook posts, critical of the utility of cow dung and cow urine in treating Coronavirus. As they stand identically situated, we are of the opinion that the continued incarceration of the petitioner’s husband would be as much a violation of Article 21 of the Constitution, as it was in the case of Erendro Leichombam”.

While the news of submission of resignation by the Manipur Pradesh Congress Committee (MPCC) President Govindas Konthoujam broke in media, the All India Congress Committee (AICC) Manipur in-charge Bhakta Charan Das said that preparation for the coming 2022 state assembly election has begun from July 22 and the roadmap for the election will be ready in the next seven days.

Barely a day after MPCC president Konthoujam Govindas resigned from his post and news of possibility of Congress MLAs joining the BJP has gone viral in social media, the AICC Manipur in-charge Bhakta Charan Das arrived in Imphal on early July 21. Several state party leaders, including MLA K Meghachandra and former minister Dr. Kh Ratan Kumar received him at Imphal Airport. Bhakta Charan Das said that new developments in the state party will be seen within a few days.

After his arrival, Bhakta Charan Das took the stock of the situation holding series of talks with MPCC leaders and Congress Legislature Party (CLP) members.

Responding to media during an interaction held at Manipur Congress Bhavan located, BT Road Imphal on July 22dia, Bhakta Charan Das said that the post of MPCC President will be filled up as soon as the resignation of Congress MLA, Govindas Konthoujam is officially received. During the media interaction, former Chief Minister and CLP leader Okram Ibobi and Congress Working Committee member Gangmei Gaikhangam were also present.

The AICC Manipur in-charge speaking on the issue of COVID-19 situation in Manipur said, “Chief Minister N Biren Singh has failed to control the prevailing situation of the pandemic in Manipur other than imposing curfew. He should let the people know that the current situation is beyond his hand.”

He further questioned, “Why the chief minister, who is also the state health minister, not been able to stop the daily mortality rate in the state where there are hardly around 30 lakh populations?”

He further said that the state BJP has no constitutional right to sit in power and there is no question of joining BJP by Congress MLAs. Such type of issues and discussion has no value as BJP never gives priority to bring welfare for the people but to remain in power. He also appealed to the 12 parliamentary secretaries to respect the situation and the constitutional rights, reports added.

After July 26, Congress party will let the people know to take necessary steps for betterment of the people in the state, he added.

Malom Khul has a total population of 354 who are above the age of 18. And along with three individuals from the neighbouring village, all 354 residents of the village were vaccinated on July 22 making Malom Khul a totally vaccinated village, reports added.

Notably, Azuram village at present has 153 eligible persons for vaccination, of which as many as 149 persons have been vaccinated at 97.38 per cent till July 15, reports quoting Armstrong Pame, Deputy Commissioner of Tamenglong District and Chairman of District Task Force on COVID-19 on July 21 said.

As a part of the global fight against the COVID-19 pandemic, the Committee on COVID-19, Manipur consisting of CADA, UPF, NIPCO, AMSU, UPACO and MAPI Council organised Covid mass awareness drives at various parts of Kakching and Chandel districts on July 22. 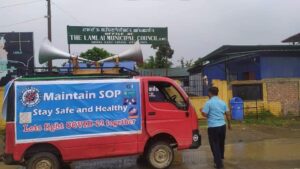 A release issued by Media Coordinator of the COVID-19 Committee Geetchandra Mangang stated the awareness drives were conducted under the theme of ‘Get Vaccinated, Stay Safe from COVID-19; Vaccination is the only way to fight COVID-19; Maintain SOP, Stay safe and healthy; and Lets fight COVID-19 together’.

The Committee on COVID-19, Manipur will continue the drive in various parts of Manipur, reports said.

The President of India Ram Nath Kovind in his capacity as the Visitor of Manipur University has been pleased to appoint Prof. Lokendra as the VC, the letter said.

Prof. Naorem Lokendra has assumed the office of the Vice Chancellor of Manipur University on July 23 in presence of deans of schools and heads of departments of the University, reports said.

The Registrar of MU, Prof. W. Chandbabu on July 23 further announced the appointment of Professor Naorem Lokendra Singh, Head, Department of History, Manipur University as the Vice Chancellor of Manipur University, Imphal as per Statute 2(1) of the Manipur University Act, 2005. He will be holding a term of five years from the date on which he enters the office, or until he attains the age of seventy years, whichever is earlier, the registrar stated.

Lairenjam Bijen, a staff reporter of Imphal Times, an evening daily passed away on July 23 at about 9:45pm due COVID-19 at the Regional Institute of Medical Sciences (RIMS), Imphal.

He tested COVID-19 positive on July 19 and was undergoing treatment at RIMS. He has been working with the evening daily since 2016.

Dr. Rajkumar Ranjan, Minister of State for Ministry of Education and Ministry of External Affairs has launched the Online Post Graduate Diploma in Sustainability Science (PGDSS) of the university through a virtual function on July 24. The PG Diploma programme is launched by the School of Inter-Disciplinary and Trans-Disciplinary Studies (SOITS) of IGNOU. It is being offered through Online Mode.

Dr. Ranjan in his address referred to the UN 2030 Sustainable Development Goals said that the launch of this programme augments the work needed to be done for achieving the milestones set for environmental restoration for future. He complimented IGNOU for launching of this programme and said that the skills required for the environment sector will also generate employment and is in consonance with the New Education Policy, a press release said.