Manifestos: BJP Focuses on Freebies to Woo Voters, Silent on AFSPA; Other Political Parties Commit to Repeal AFSPA if Voted to Power

While other major political parties including Indian National Congress (INC), National People’s Party (NPP) and Janata Dal-United (United) which are fighting for the 12th Manipur Legislative Assembly Election 2022 promise to repeal the Armed Forced Powers Act (AFSPA) if they are voted to the power, the ruling party Bharatiya Janata Party (BJP) keeps totally silent on this long standing demand of the people of India’s Northeast particularly Manipur.

However, the ruling BJP has promised a number of freebies to woo voters in the in the state ahead of the two-phase poll scheduled for February 28 and March 5 as listed in its manifesto released by the party’s national president JP Nadda on February 17 in Imphal as the last major political party which published election manifesto for the 12the Manipur Assembly Election. 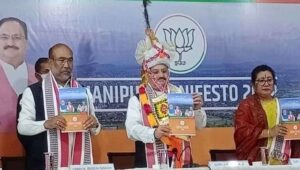 In the BJP Manifesto which is claimed to be developed based on the suggestions from 1,58,000 voters of the state collected through Public Suggestion Boxes, the Manipur Manifesto 2022 Highlights 20 key-points. Theri commitment to protect the territorial integrity and preserve the rights of the indigenous people of Manipur and its rich cultural heritage tops the 20 highlights.

Addressing the gathering of media and party leaders for the release of the BJP Manifesto, party national president JP Nadda announced the 20 highlights of their manifesto. Of the 20 highlights, 2 to 9 are all about freebies to woo the voters. Targeting to PM Ujjwala beneficiary households, highlights number 2 states that two free LPG cylinders will be provided annually to all the PM Ujjwala beneficiaries of the state.

Targeting students and youth, the manifesto further highlighted, “Free scooty will be provided to all meritorious college going girls of the state. Girls from EWS and backward sections will be provided win an increase of Rs. 25,000 under Rani Gaidinliu Nupi Maheiroisinggi Scheme. Free laptops will be distributed to all the meritorious students passing class 12th to support their higher education.”

Further targeting the senior citizens and farmers of the state, the BJP promises, “Monthly pension for all the senior citizens in the state will be increased from Rs 200 to Rs 1,000. Financial assistance of PM-KISAN Samman Nidhi Yojana will be increased from Rs 6,000 to Rs 8,000 per annum. Free of cost, accidental insurance cover of upto Rs 5 lakh will be provided to all fishermen of the state. Scholarships will be given to the children of small and marginal farmers and as landless farmers pursuing technical education at the graduation and post-graduation level.”

The manifesto also highlighted that 100 per cent coverage of the Ayushman Bharat and CMHT scheme to provide health insurance of Rs. 5 lakhs to all eligible beneficiaries. Manipur Skill University will be established for skilling the youth of Manipur in various sectors. Establishment of AIIMS in Manipur to further advance the standard of healthcare services in the state.

Interest free loans will be provided to MSMEs for technology upgradation, capital requirement to enable better market access; and Establishment of Rs. 100 Crore Start-up Manipur Fund to provide zero interest loans upto Rs. 25 lakhs are also amongst the 20 highlights, which will benefit some section of the society.

Loktak Mega Eco-tourism and a peripheral rail network along the foothills also appear in the 20 highlights of the BJP Manifesto for 2022 Election.

On the other hand, the Manipur Pradesh Congress Committee (MPCC) on February 4 released its Manifesto called ‘Policy Statement’ at Congress Bhawan BT Road in Imphal. The Policy Statement lays out 11 Goals, 30 Key Promises and 37 Pledges.

Among the 30 key promises made in the ‘Policy Statement’ to transform Manipur as one of the fast developing states in India, the MPCC assured to urge the Government of India (GOI) to repeal the Armed Forces Special Powers Act (AFSPA), 1958; to preserve unity and integrity of Manipur, to reserve one-third of all government jobs for women and to provide 50,000 new jobs for youths annually.

Considering agriculture as mainstay of the state, the Congress party set a target to become Manipur self-reliant in rice production and promote double and triple cropping by improving irrigation facilities.

Some of the key promises made by MPCC in the manifesto are management of value-added tax rate in diesel and petrol to food and essential commodities price rise, creation of Loktak Lake Research and Training Centre, establishment of district guest house for every hill districts in the state capital, free critical medical treatment for children, Manipur Cultural Diversity Policy, minimum wages regulation for healthcare workers in private sector, review and update the list of NFSA beneficiaries.

Some other targets of the party are to attract half a million tourist per year, to formulate ‘project emerald fishery’ scheme to develop terrace pisciculture in the hills, to develop satellite towns around the capital city, to give minimum infrastructure to all primary schools, to promote at least 5000 MSMEs yearly particularly for the local food processing industries, to ensure that Manipur is free from power cuts and power shortage.

NPP Action Document to Repeal AFSPA, “One Northeast, One Voice” 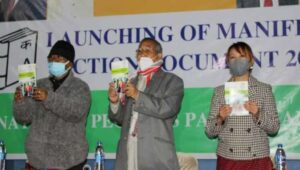 Though the National People’s Party (NPP) being a partner of the National Democratic Alliance (NDA) and is in alliance with BJP in Manipur, they are currently fighting election independently. Very openly they have made the commitment that if their party comes to power they will work towards repeal of AFSPA.

The important action to be done mentioned in the manifesto is the party’s commitment towards repeal of the Armed Forces Special Protection Act (AFSPA).

Working towards securing the agro-based industries, fishery sector, tourism sector and human resource development for economic resurgence of the state is also included in the list of NPP’s actions to be done.

The People’s Action Document 20222 also promises to give social accountability and transparency on education, quality education and early childhood education among others.

JDU Promises Repeal of AFSPA, Enactment of a ‘Constitutional Safeguard’ for Manipur 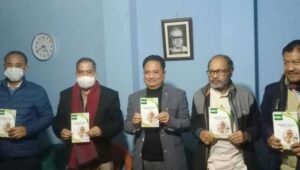 Janata Dal (United) is the third political party which releases its election manifesto after the ruling partner NPP and opposition Congress released their manifestos for the 12th Manipur Legislative Assembly Election.

The Janata Dal (United) Manifesto listed 28 promises, which includes scrapping of AFSPA, enactment of a ‘Constitutional Safeguard’ for Manipur and protection of its territorial integrity on February 10.

The manifesto of the party also promised to do everything in its power to exert pressure upon the Government of India for expediting the process of talks with the concerned stakeholders for an amicable, honourable and early solution related to insurgency in the state.

It further stated that the party would address the issues of low capital formation, inadequate infrastructural facilities, compensation for geographical isolation, communication bottlenecks and industrialisation.

Some other points highlighted in the manifesto are skill development, transparency and good governance, empowerment of women, autonomous district council election etc.

It also promised to take up necessary steps in order to transform Manipur into a food surplus state from a food dependent state. Rural development, preservation and promotion of arts and culture and sports and fishery also figure in the manifesto.

From the key points of the manifestos of the major political parties of the 12th Manipur Legislative Assembly Election, the ruling BJP is the only party which keeps silent on the issue of the Armed Forces Special Powers Act (AFSPA) while focusing on more freebies to woo the voters of all ages.

1 thought on “Manifestos: BJP Focuses on Freebies to Woo Voters, Silent on AFSPA; Other Political Parties Commit to Repeal AFSPA if Voted to Power”