The United Committee Manipur (UCM) condemning the Indo-Myanmar border fencing works being carried out in disputed areas losing Manipur’s territory by the Border Road Task Force (BRTF), has submitted a memorandum to Chief Minister Nongthombam Biren and Union Minister of State for External Affairs R K Ranjan to intervene and stop the construction work in the disputed areas.

UCM President Joychandra Konthoujam said this in a press conference held on September 16 at its office, Lamphelpat, Imphal, that after getting information from the locals about ongoing construction work being taken up between the disputed border pillar 80 and border pillar 81, the committee inspected the site recently on August 26 and August 27, reports said.

The UCM witnessed digging of fresh potholes in the subsidiary pillar 40 by losing a distance of around 100 m towards India. The UCM has been working to settle the disputed pillar as the state loses its territory by shifting the said pillar towards the state. Amid this situation, the construction of border fencing is going on and to show condemnation, the UCM has urged the authorities to stop the construction work immediately, he added.

Konthoujam continued that the committee had filled up the potholes which were dug to construct border fencing. However, BRTF continued the construction works even after that. The committee would not tolerate such action of BRTF and as such, various forms of agitation would be launched if they continue the works, reports added.

President Joychandra claimed that the Surveyor General of India on July 24 and July 25, 2018 accepted the claim made by people of the state of shifting border pillar 80, 81 and 82 causing loss of areas towards India’s side.

The UCM will never accept the ongoing construction of border fencing until and unless the boundary is demarcated based on an agreement signed between the government of India and government of Burma at Yangon on March 10, 1967, UCM President warned.

Along with this, the state government should urge the Centre to produce white paper on the current state boundary where the fencing and construction of subsidiary pillars are taking place, the UCM president demanded.

On Modi’s Birthday CM Biren Launches ‘Health For All’ Scheme

Manipur Chief Minister Nongthombam Biren on September 17 launched State Government’s ‘Health for All’ scheme as a part of the celebration of Prime Minister Narendra Modi’s birthday.

The ‘Health for All’ scheme of the state government will provide doorstep health checkups and medicine delivery to different sections of society in Manipur, the Chief Minister Nongthombam Biren said during a cleanliness drive in Imphal.

In launching the ‘Health for All’ scheme Chief Minister Biren also took time to spend “some time with our doctors, nurses, other healthcare and housekeeping staffs at JNIMS” and thanked them for the service. He also distributed sweets to them, reports added

“As part of Hon’ble PM Modi Ji’s birthday celebration, I am truly glad that I could spend some time with our doctors, nurses, other healthcare and housekeeping staffs at JNIMS. I thanked them for their service and distributed some sweets as well,” Chief Minister Biren said in another tweet.

The Chief Minister Nongthombam Biren was seen taking part in the cleanliness drive conducted in the state capital, Imphal, as a part of Prime Minister Narendra Modi’s birthday celebration in the state.

“During a cleanliness drive carried out as part of Hon’ble PM @narendramodi  Ji’s birthday celebration, I’m happy to  launched the ‘Health for All’ scheme of the State Govt. which will provide doorstep health checkups & medicine delivery to different sections of society in Manipur,” CM Biren tweeted.

10 Variants of COVID-19 Found In Manipur 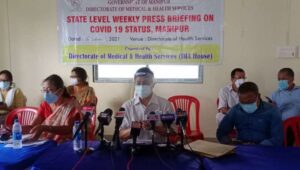 Manipur Health Services director Dr K Rajo on September 16 informed that a total of 10 variants of COVID-19 have been found in the state during genome sequencing of 1,002 samples collected from COVID-19 positive persons.

Dr. K Rajo had disclosed this while speaking to the media during a state level press briefing on COVID-19 pandemic held at State Ophthalmic Cell of the Health directorate in Imphal.

Until September 15, a total of 2,054 samples had been sent for genome sequencing, of which 1,002 results have arrived while the results of the remaining 1,052 are still awaited, the health director added.

Informing that a person can easily prevent from getting infected by all these variants if the person is fully vaccinated, he reiterated that getting vaccinated and following the Covid appropriate behaviours are the only measures to protect oneself from the virus, reports added.

The All Manipur Working Journalists’ Union (AMWJU) observed its 48th foundation day on September 16 at the Manipur Press Club in Imphal in a low-key manner due to the COVID-19 pandemic.

As a part of the observance, former members and members of the AMWJU paid floral tributes to the Journalist Memorial Pillar erected at the campus of the Manipur Press Club, as a mark of respect and in remembrance of the late journalists of the state.

The founder members of AMWJU and veteran journalists were also honoured during the observance by delivering small token of love at their doorsteps, reports added.

Expressing his happiness Chief Minister Biren tweeted, “What a great start to the day for Manipur!… I’m really happy to share that 2 (two) products of Manipur viz Hathei Chilly & Tamenglong orange have been granted GI Tag. This is a historic milestone in the history of Manipur which will increase the income of the farmers immensely,”

Hathei chilli is native to Sirarakhong village in Ukhrul district and is popular for its distinctive vibrant colour and unique flavour. Cultivation of this particular variety of chilli is the main source of income for villagers of Sirarakhong.

Tamenglong orange is grown widely in all villages in Tamenglong district. People of state preferred Tamenglong orange to other oranges. Owing to its exotic variety, a state level Orange festival is held in Tamenglong every December to promote farming of the orange variety found in the region and provide sustainable livelihood for orange growers in the district.

Manipur has achieved the target set by the Union Finance Ministry for Capital Expenditure (CAPEX) in the first quarter of the current financial year 2021-22.

According to the Finance Ministry, Manipur is one of the 11 states to meet this target. The other 10 states that achieved CAPEX are Andhra Pradesh, Bihar, Chhattisgarh, Haryana, Kerala, Madhya Pradesh, Meghalaya, Nagaland, Rajasthan and Uttarakhand. Thus, as an incentive, these states have been granted permission by the Department of Expenditure to borrow an additional amount of Rs 15,721 crore, reports said.

The additional open market borrowing permission granted is equivalent to 0.25 per cent of their Gross State Domestic Product (GSDP), which is Rs. 90 crore for Manipur.

Additional financial resources thus made available will help the States in pushing their capital expenditure further.

Reports said the capital expenditure is part of government spending that goes into creation of assets, investments that yield profits. It has a high multiplier effect, enhances the future productive capacity of the economy and results in a higher rate of economic growth.

Remembering the alleged massacre of Kuki tribes including women and children during the infamous Kuki “genocide” of 1992-1997 by the armed cadres of the NSCN (I-M), the Kuki tribes on September 13 observed 28th Sahnit-Ni (Kuki Black Day) in Manipur.

Kuki Inpi Manipur (KIM) Vice President Hemzangthang Khongsai while speaking to the media at the office of KIM in Imphal said during the Joupi Massacre of September 13, 1993, as many as 108 innocent Kuki villagers, including women and children were allegedly killed by the armed cadres of the NSCN (I-M) in different places of Tamenglong and the erstwhile Senapati district.

Hemzangthang said that from 1992 to 1997, around 1,000 innocent Kukis, including women and children were killed and 300 Kuki villages were uprooted by the NSCN (I-M), turning over 1 lakh villagers to become refugees in their own land.

“September 13 is the bloodiest and darkest date in the history of the Kuki tribe. It is the day, the Kuki around the globe pause to remember and reflect on the horrors of the mass killing of Kuki tribes by the NSCN (I-M),” the vice-president said.

Calling for delivery of justice from the government for the innocent souls, Hemzangthang said, “we will continue our fight against injustice and oppression with a renewed fervour and resolve, and we will continue to do so with a religious fervour until justice is duly served to the victims of the Kuki Genocide.”

Though the observation has not been held unlike past with public function due to the Covid pandemic, all the Kuki Villages in Manipur observed the day with mass prayer, reports added.

Manipur Education Minister Sorokhaibam Rajen on September 12 said that the state government will provide free mobile phones under the Chief Minister’s E-Support Scheme to higher secondary students who are below the poverty line.

Reports said the Education Minister made the announcement during a reception ceremony of newly joined BJP members of Lamshang Mandal held at Leitong on September 12, organised by BJP Lamshang Mandal. Altogether 221 new BJP members were felicitated during the function.

Addressing the function as chief guest, Rajen said that considering the inconveniences faced by BPL students in attending online classes as most of them do not have mobile phones, the state government has started distributing mobile phones under Chief Minister’s E-Support Scheme. So far 2,000 mobile phones have been distributed to college students of around 45 government colleges.

For the next round, the government is set to distribute mobile phones to students of Class XI and XII. The students will be selected based on the names submitted by the school authorities, Minister Rajen informed.