Manipur Chief Minister Nongthombam Biren March 25 has warned drug dealers or peddlers operating in the state to either surrender or face consequences as stringent action will be taken against them. 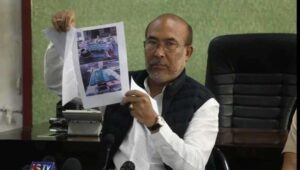 Chief Minister Biren was addressing a press conference at his secretariat in connection with the ongoing “War on Drugs-2” which was launched immediately after the formation of the new BJP led government in Manipur.

Reports said the Chief Minister also warned that any person who is arrested in connection with illicit drug-related case, regardless of the quantity, would have to undergo compulsory imprisonment of at least one year which may extend up to two years under the Prevention of Illicit Traffic in Narcotic Drugs and Psychotropic Substances Act.

However, possession of illicit drugs which are to be used at rehabilitation centres will be exempted only if provided the necessary certificate prescribed by the government’s authority concerned, he informed.

Tap water promised for every household by Dec 2022

Chief Minister Nongthombam Biren has assured the people in Manipur that tap water connection will be provided to every household in the state by December 2022. Biren made the assurance on second day (March 25) of the first session of the 12th Manipur Legislative Assembly in a response to the observation moved by legislators in the house during discussion and voting on demands for supplementary grants.

Biren said that the water supply scheme taken up by the state government with the support of New Development Bank is almost on the verge of completion. Despite the fact that most of the developmental works are being hindered by COVID-19 pandemic, around 63 per cent of household have been connected with tap water supply during this tough period. The state is putting all effort to provide tap water to every household by December 2022, the Chief Minister Biren said. 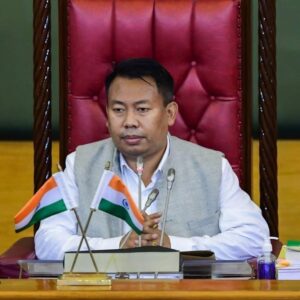 Yaiskul AC MLA Thokchom Satyabrata has been unanimously appointed as the Speaker of the 12th Manipur Legislative Assembly on March 24.

As many as 11 notice of motion from three political parties were in favour of Satyabrata during the first session of the 12th assembly session. Following the motion, he was unanimously elected as the Speaker of the 12th Manipur Legislative Assembly. Satyabrata is the only MLA who had filed a nomination for the post of Speaker.

Thokchom Satyabrata served as a cabinet minister for CAF & PD, Law and Legislative Affairs, Labour and Employment in the previous BJP-led government under Chief Minister Nongthombam Biren. He was first elected in 2017 from Yaiskul AC on a BJP ticket. He was re-elected in the recently concluded Manipur Assembly Election defeating his nearest rival NPP candidate Huidrom Vikramjit. He holds a master’s degree in Life Science, reports added.

The Government of Manipur has re-constituted the ‘Anti-Corruption Cell in the Office of the Chief Minister, Manipur to receive and act on complaints against public servants, received from the general public.

As per an order from the Secretariat’s Vigilance and Anti-Corruption Department issued by Dr. Rajesh Kumar, Chief Secretary, Government of Manipur the Officer-in-Charge of this ‘Anti-Corruption Cell’ will be an officer, not below the rank of a Joint Secretary to the State Government.

The National Assessment and Accreditation Council (NAAC), India has accredited the NG College, Lamphelpat in Imphal West in first cycle and awarded B-Grade (2.43) according to a press release issued by the Principal of the college, Ashok Roy Choudhury.

NG College is a exclusively an arts college of Government of Manipur offering only eight subjects, the release added.

The State Vigilance and Anti-Corruption arrested one Pradhan in connection with manipulation of works implemented under Mahatma Gandhi National Rural Employment Guarantee Act (MGNREGS) on March 25.

A press release issued by superintendent of police, State Vigilance and Anti-Corruption stated that the arrested person was identified as one Ningthoujam Ramananda son of Ningthoujam Babudhon of Thangalawai Sabal Leikai, Kha-Thinungei in Bishnupur district.

It stated that Ramananda is the Pradhan of Kha-Thinungei Gram Panchayat, and he was arrested under a complaint registered at the Vigilance and Anti-Corruption Police station, Manipur.

During investigation, he revealed that he manipulated the implementation of works executed under MGNREGS, State Finance Commission and 14th Finance Commission in Kha-Thinungei Gram Panchayat for his wrongful gain by corrupt practice in connivance with other officials and private persons, it added.

Citing “significant improvement” in COVID-19 pandemic situation in Manipur, the state government has directed the director of Manipur Health Services to close down all existing Covid Care Centres (CCC) in the state, except the CCC RD Wing, Lamphelpat with immediate effect.

A letter issued to the director of Health Services by the state deputy secretary, Health and Family Welfare stated that the CCCs at Lamboi Khongnangkhong and Bal Bhavan will be cleaned, retained and all equipment will be safely stored in the same buildings to enable easy future operationalisation.

Any existing inmates in CCCs around Imphal will be shifted to CCC RD Wing, the letter stated, adding that the CMOs are to ensure that all equipment in CCCs in different districts are to be properly accounted and kept in safe custody to facilitate easy future operationalisation.

The director of Health and CMOs may make necessary arrangements in hospitals or other government health centres for managing existing and fresh COVID cases, it mentioned.

Directing immediate disengagement and termination of all the contract and daily wage staff being engaged by the directorate of Health and in the districts by CMOs or Medical Superintendents (MSs), the director has been asked to take necessary action for managing Covid cases with regular staff.

The letter also sought detailed report of Covid staff engaged on contract and daily wage beyond December 31, 2021 both by the directorate of Health in Imphal and in the districts by CMOs and MSs.