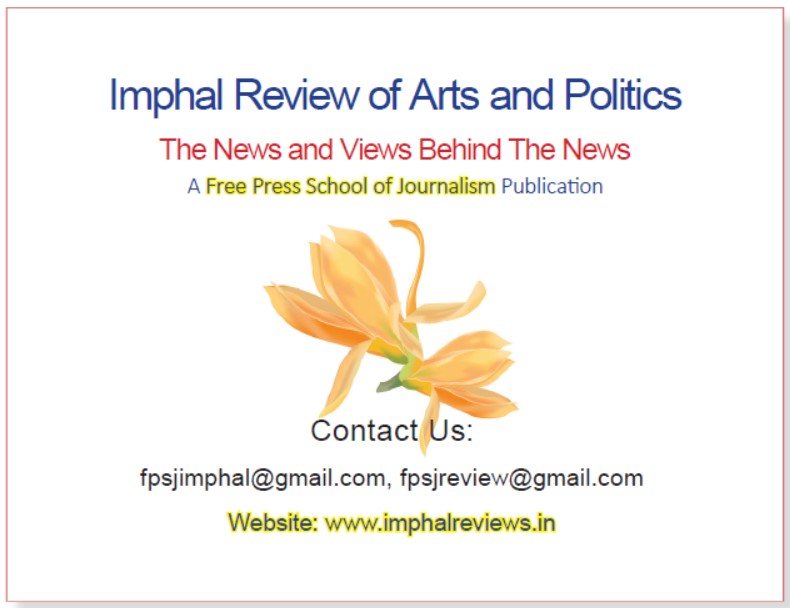 A gifted child is naturally different from others of his age. An artist is born, not made – an innate quality lights his whole being. Shri Thoidingjam Tombi Singh was born in 1936 with this inherent faculty and grew up with all the signs. He started making drawings very early during his school days, in fact, while yet a day scholar in the Elangbam Leikai Lower Primary School of Imphal. As a child he was a precocious boy, given to long spells of silence, who seemed to be lost in thought – in other terms he grew up a serious boy. Even now, he is soft spoken, very mild, the very opposite of outspokenness – malice, anger, remorse all remain confined in the hidden corner of his heart. We find this quality of subjugation of the passions in his paintings. Thus his art, in general is suffused with a subtlety – a subdued expression that has become his signature in the field of painting. Regarding the markings of an artist in Tombi it has been mentioned that since early boyhood he was always absorbed in making pencil sketches of the natural surrounding incessantly. His father late Thoidingjam Amuba Singh was then an Assistant Teacher in Johnstone High English School at Imphal that had a name of its own as an educational institution. As a teacher, he was also a much respected person. By nature, he was a strict disciplinarian, a god-fearing orthodox Manipuri Vaishnavite. As such, he had already translated Bankimchandra Chattopadhya’s Dharma Tatva) a renowned work on Hindu religion. And Tombi’s grandfather is said to be a carpenter and a conch player for religious ceremonies.

Of the five brothers and three sisters Th. Tombi Singh is the only one dedicated to the arts while three of his brothers are police officers. The one elder to him is an educationist as well as a writer. His father of course liked him to be more sincere in his general studies. However, he did not disturb much his son in his interest in painting.

Some remarkable incidents do usually happen in the making of artists which give the rare sparks that lead to the act of creativity. Th. Tombi Singh had also one such indelible incident in his childhood that proved to have shaped his career in the arts. In those days the mandapas were usually decorated with paintings connected with religion and legendary figures of sorts. This tradition came into existence prominently with the paintings of the great artist Ningthoujam Bhadra Singh (1861-1927). He is one of the earliest realistic painters of Manipur who used both poster and oil colours. Now Th. Tombi had the opportunity to see a live painting performance by the Shri Mangsidam Kalachand Singh (1893-1954) who happened to be a great disciple of Bhadra Singh. The place as a mandapa as Thangjam Bon which was very close to his house. His young hart was enthralled in seeing the brush strokes of the master artist in person. The scene remains evergreen in his mind’s eye. Afterwards, he never missed any opportunity to see such occasions.

One’s sincerity attracts like minded souls. The young Tombi’s interest was noticed by one Khumukcham Joykumar Sing, a person about four years older than him who was a resident of Thangjam Bon. He had the farsightedness to introduce Th. Tombi to the renowned artist H Shyamo Sharma (1917-1979) who was then the Principal of Imphal Art School, a prestigious school of art which h established in 1949. This school is closely associated with the growth of fine arts in Manipur. Its students are the precursors of the modern movement of arts of the state. The founder Principal of this school is without doubt the father of modern art in Manipur with romantic overtones and expressionistic felicity. He strengthened the foundation of arts of Manipur. His place as the pioneer of contemporary modern art is unrivalled. This great artist H. Shyamo Sharma is the adi guru of Th. Tombi Singh. Many Years later he himself became one of the teachers in this school in 1992, Th. Tombi also published H. Shyamo Sharma: A Monograph – needless to say a veritable tribute to his great teacher. Now, the school has become The Imphal Art College (upgraded in 1959), which is duly affiliated to the Manipur University, Canchipur.

The first instance of introduction to H. Shyamo Sharma proved to be a moment of happy consternation and excitement to Th. Tombi Singh. His enthusiasm to learn painting was related to the great teacher by his elder brother Kh. Joykumar Singh. On the other hand, H. Shyamo Sharma was secretly over-delighted to receive a promising youth. Afterwards, Th. Tombi was admitted to the school under one condition that made room for his painting studies in the school on Saturdays and Sundays only and he was to attend to his classes on the remaining days in the L.P. School which arrangement was also approved of by his father. He was around fourteen years old by then. In those days the Imphal Art School was run in the homestead of Shri Khongbantabam Ibetombi Singh, Rtd. Session Judge at Uripok, lmphal.

Th. Tombi expresses sentimental reminisces about his old days in the art school. There were three to four classes in the entire school having seven to eight students in each class. They were instructed to do studies of natural objects and human figures. It consisted of a four-year diploma course.

Shyamo Sharma had tender feeling towards Th. Tombi which might be due to the hidden talent he gleaned in the young student. The Principal himself presented a sketch book of about sixty leaves to his favourite student and asked him to sketch scenes of forests, animals, clouds and human figures which Tombi obediently followed. The works pleased H. Shyamo very much and he said to other students in the class – “Look, you who attend regularly can’t draw as satisfactorily as Tombi does. He attends the class twice a week only.” This was the first ever compliment and blessing Tombi received from a teacher like H. Shyamo Sharma. The next blessing and compliment of such value he received came to him many years later from the lips of his honoured master and eminent artist Prof. K.G. Subramanyan while he was studying painting at M.S. University of Baroda during 1975-77. The students were asked to draw and paint from early morning till noon according to their own choice. Prof. Subramanyan later observed critically. Most of the time he remained silent. Afterwards other students co1lected at Th. Tombi’s studio and requested him to look at their respective sketches and paintings. He got the shock of his life to hear such strange requests for he was not the teacher. On seeing his discomfiture they said, “Subramanyan Sir had asked us to show our works particularly.” The intimation of his guru’s blessings ran through his heart at that time electrifying his whole being. The sketch or drawing book is a companion to the artist. It is required to record the artist’s instantaneous mood, feeling, impressions as they come before they fall into oblivion. The first spontaneous stroke of the sketch is an entity in itself which may be different from a work of art done laboriously in academic manner. The moods captured in the drawing books are then recast on the canvas. Drawings and sketches by famous artists had been published all around the globe, Picasso’s being one of them. Th. Tombi started maintaining sketch books from 1950 and till date there are about twenty such books each of them having not less than sixty pages containing altogether around three hundred sketches. Let the sketches come to light on canvas one day.

For four years Th. Tombi studied in the Imphal Art School under the able tutorship of H. Shyamo Sharma. A few remarkable works of that era are -1. Villagers Repairing a Damaged Barrage, 2. Landscape and 3. The moon Rising – all of these have a marked stamp of realistic painting. While in his final year he painted a picture titled Shamu Khongyetpa based on the Khamba-Thoibi legend of Manipur. For many years this painting adorned the mandapa of one Thangjam Madhumangol Singh at Keishamp at in Imphal. But now it has disappeared. Th. Tombi’s early days were heavily influenced by his guru H. Shyamo Sharma.

In 1942 Manipur also became a theatre of the Second World War. It was an unforgettable chapter in the history of this small state, for it ushered in an era of dynanuc socio-political changes. The ensuing three to four years saw a scene of unprecedented devastation and also a re-awakening in Manipur at large. Th. Tombi was a boy of six in those days. Like others they too fled to a village called Meitram about ten kilometres far from their parental home at Imphal, leaving the house in the care of his grandmother. They returned home after a sojoun of about three years. What met their eyes was an unimaginable scene – an unattended surrounding was there in place of their tidily kept courtyard. The bizarre scene is still imprinted in the artist’s mind. What struck him more was the changing socio-political scenario in the erstwhile tradition bound state of Manipur. All these were not lost to the artistic conscience. The state was gradually exposed to the global modernistic experiences. These enriched the artist’s mental synergy. 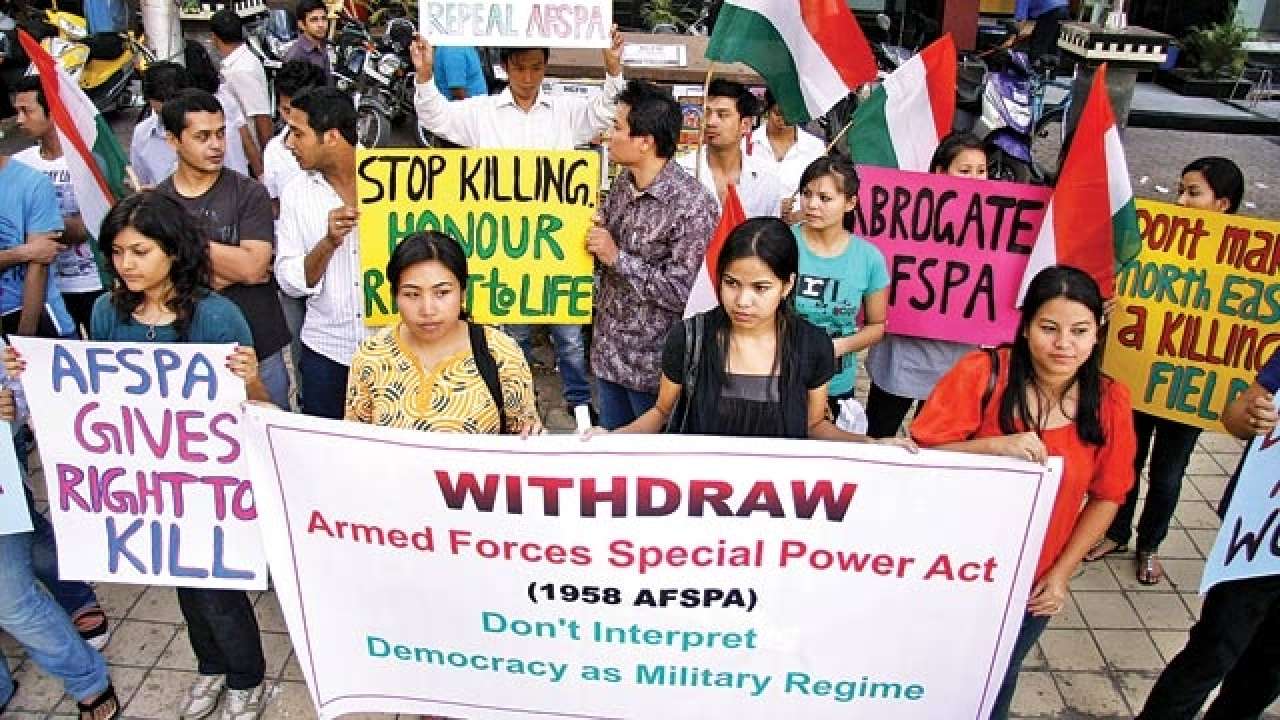 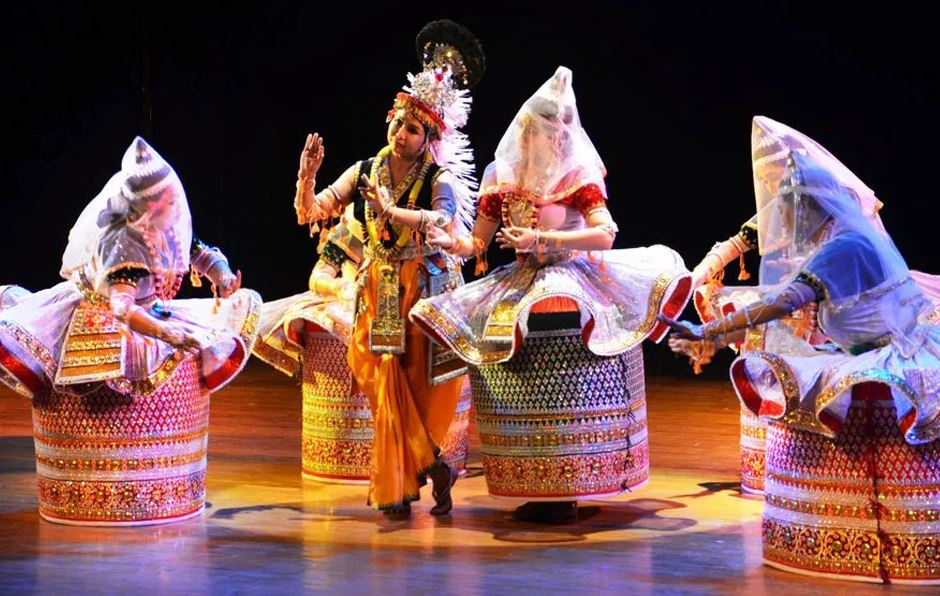 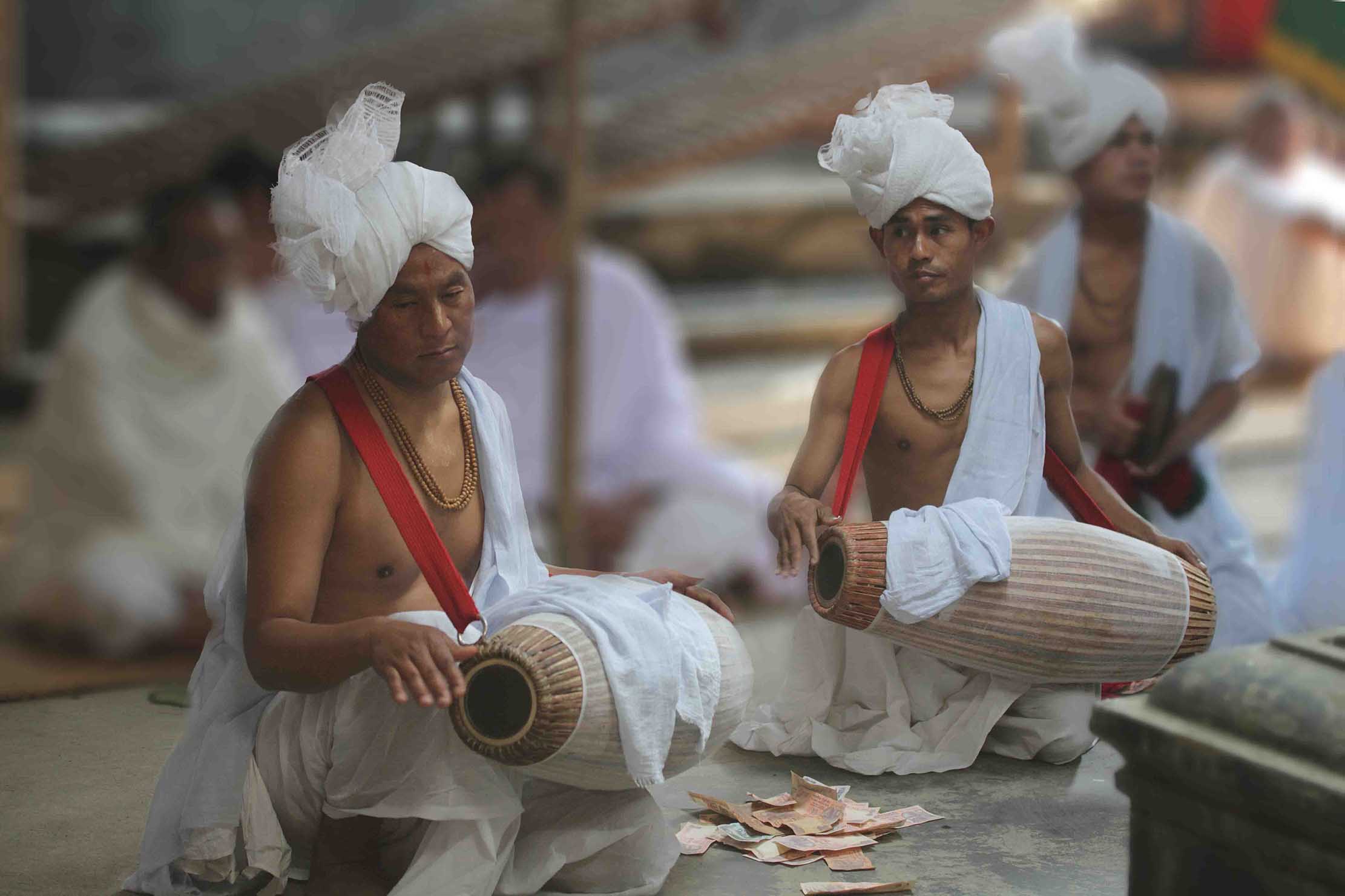 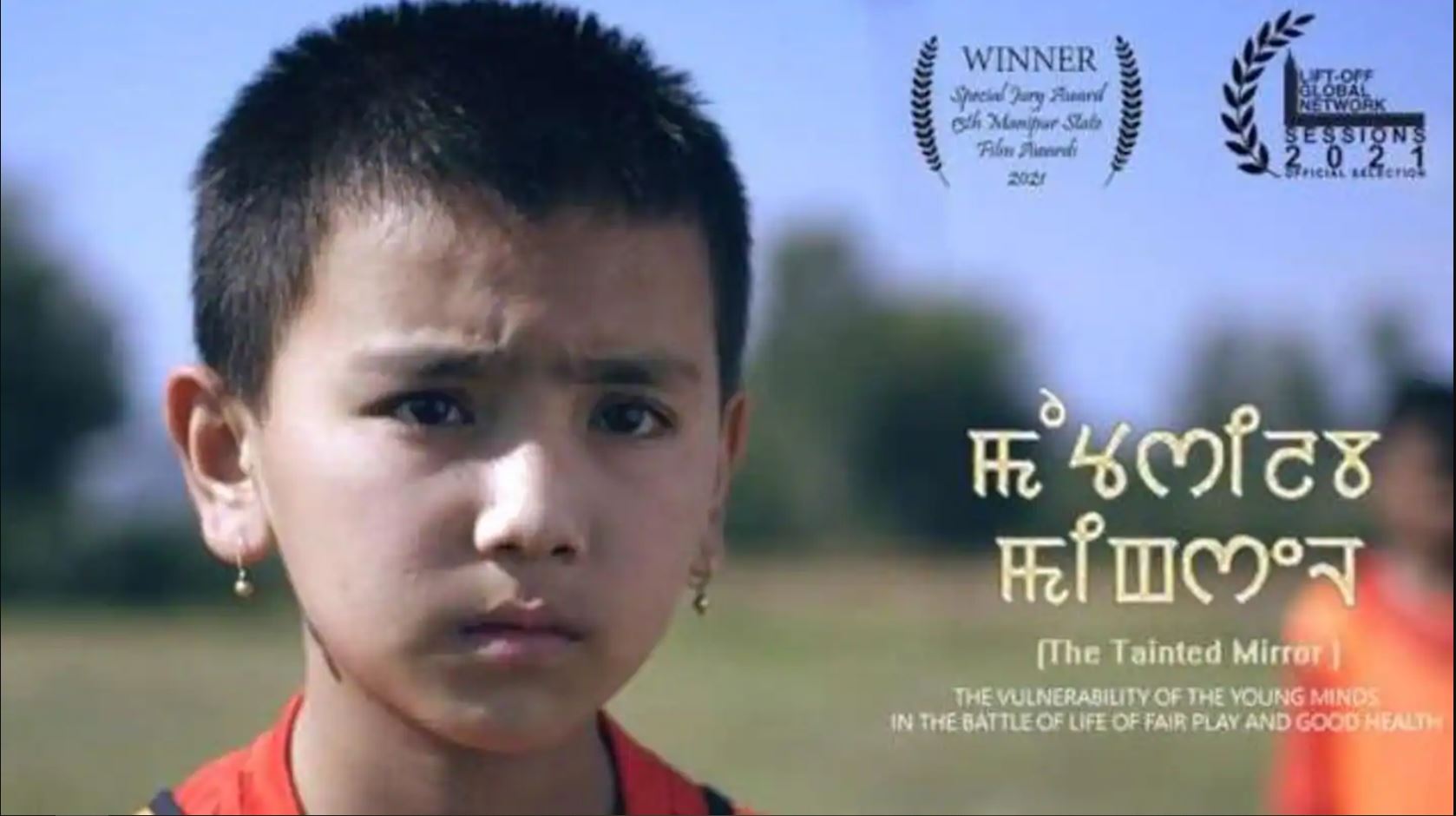