Under War on Drugs 2.0 a new scheme called ‘Cultivation of Horticulture Crops as an Alternative to Poppy Cultivation in Hill Areas’ was launched at the office complex of Department of Horticulture and Soil Conservation located at Sanjenthong on June 10 by the state government in the interests of all the farming community in general and the illegal poppy farmers in particular. The scheme was launched by the Chief Minister Nongthombam Biren along with the brand ‘Manifresh’, under the state department of Horticulture and Soil Conservation. 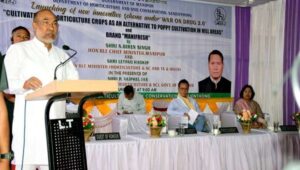 Launching the scheme Chief Minister Biren said the government is committed to its ‘War on Drugs’ campaign and there would be no question of moving back in its efforts to root out drug menace from the state. “The government has no enmity with anyone or any community,” he said and he added that the campaign was started with the aim to conserve forest areas, to uproot poppy cultivation, drugs trafficking and its consumption ensuring a better future for the younger generations.

Chief Minister said that 355 farmers who earlier depended on poppy cultivation for their livelihood in Kangpokpi, Kamjong and Ukhrul districts have benefited with alternative arrangements under the War on Drugs campaign, reports added.

He stressed the need of the officials concerned to visit various villages and meet the farmers, making them aware of the ill effects of poppy cultivation and about the initiatives of the government towards providing alternative arrangements for earning their livelihood.

Later, the chief minister flagged off the vehicles carrying planting materials which were to be provided to farmers of five districts, including Chandel, Kamjong, Kangpokpi Tengnoupal and Ukhrul. Planting materials of ginger, turmeric, large cardamom, low chilling apple, pineapple, Kachai lemon and Tamenglong orange will be distributed to the farmers of the five districts as the first phase. While, for winter vegetable seeds will be distributed by October 2022 as the second phase.

An amount of Rs 400 Lakh is earmarked for the year 2022-23 for implementing the alternative livelihood to poppy cultivators. An annual action plan with different components is also prepared for implementation with a target of 500 farmers covering about 500 acres in the districts of Chandel, Kamjong, Kangpokpi, Ukhrul and Tengnoupal districts, reports added. 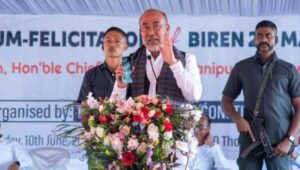 Reports said the development work of Thomas Ground with an outlay of Rs 9 crore, which include developing the football ground, retaining walls, multipurpose hall, compound wall, among others, will begin in the next three months, the chief minister informed.

The Chief Minister also informed that market sheds will be constructed at Keithelmanbi and Saparmeina at the cost of Rs 20-30 lakh per unit depending on the number of vendors.

Manipur Chief Minister Nongthombam Biren warned that no villages or localities should change their names without the consent or approval of the concerned authorities or department.

Speaking as chief guest during 1st Foundation Day of Salaicha Pibarel Punshi Marup, Manipur (SPPMM) at MSFDS, Palace Compound on June 8, Chief Minister Biren termed it unfortunate that many places in the state are changing its name. The present government is very much focused on maintaining the originality of everything in the state which the forefather bestowed and anyone changing the name of village or localities without the consent of authority concerned will not tolerate it. Besides this, the government will take strict action against those who try to distort the history of Manipur, he warned.

The Chief Minister said maintaining unity and integrity amongst various ethnic communities is the foremost step towards equal and inclusive development. The Meitei community, being a majority community, should take responsibility for maintaining the aged-old relation as a “guardian” of all communities by taking their sincere care and love, reports added.

Chairman of SPPMM and MLA of Keirao Assembly Constituency Lourembam Rameshwor said that with an objective to protect the state from any unwanted incident that will threaten ethnic communities, SPPM was formed. 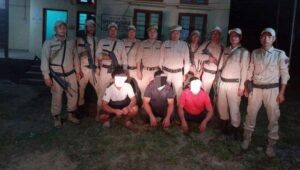 Reports said all three suspects are from Naphai village. They were produced before the Duty Magistrate and remanded to police custody. As a part of the investigation launched by Saikul Police Station in connection with the case, all license guns found in Naphai Village have been confiscated.

The move to collect licensed guns came after police found an empty case of SBBL rifle from the crime scene. The process to screen all the collected licensed guns is underway. Considering the sensitive nature of the case, Saikul Police Station is closely considering all angles and motives behind the crime and carrying out intensive investigations. 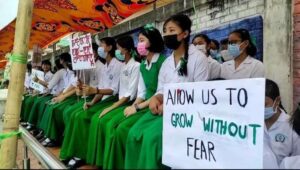 Condemning the June 5 IED blast at the Little Flower School (LFS) in Imphal, students and teachers of the school took out a protest demonstration in front of the school on June 6. They demanded a violence free education zone. The protesters held placards with slogans which reads, “Stop violence,” “Allow us to grow without fear,” “we condemned bomb attack at our school,” “we are the pillars of future,” among others.

Reports said miscreants exploded an IED at the LFS gate No 2 at around 3.15 am Sunday, June 5. There was no report of any casualty. However a portion of the gate was damaged due to the impact of the blast.

The All Manipur Catholic Union (AMCU) on June 5 also expressed strong condemnations against the group that had planned the blast at Little Flower School in Imphal East, and appealed to the state to take proactive actions so that the people who are responsible for these violent acts are brought to justice.

Meanwhile, a cadre of National Revolutionary Front Manipur (NRFM) was arrested in the late hours of June 6 from Imphal East for alleged involvement in a series of IED blasts, including the recent IED attack at Little Flower School. A huge amount of explosive materials were also seized from his possession. The arrested cadre has been identified as one Thounaojam Rishi Luwangcha, 46, son of Thounaojam Shellung of Kangla Sangomshang Makha Leikai in Imphal East district, reports added. 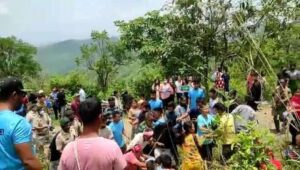 At least eight persons, including three women and an 80-year-old village chief of Nongmaipal village in Nongmaiching Hills under Kangpokpi district were detained on June 5 following a scuffle over tree plantation by the forest department at Nongmaipal village under the Island block.

Reports said the scuffle reportedly occurred after a standoff went wild between a large number of people along with the officials of Forest Department and the police who went for a tree plantation drive at Nongmaiching Reserve Forest with the local populace.

On the other hand Coordinating Body, Khurai spokesperson Bon Khurai on June 6 claimed that the clash which took place at Nongmaiching hill range occurred between those who wanted to cultivate poppy plants by practicing deforestation in the hills and those who wanted to plant trees in order to save the environment.

An RTI activist has demanded the authorities concerned to remove the current Vice-Chancellor of Manipur Technical University (MTU) Bhabeswar Tongbram from the said post on the alleged charges of misconduct, incompetent, dishonesty, fraudulent and immoral.

During press conference at Manipur Press Club on June 7, Co-convenor of Movement for People’s Right, Right to Information Act, Wahengbam Joykumar alleged that the appointment of Tongbram Bhabeswar as Vice Chancellor of MTU is not competent and totally against the norm of university grant commission. This discrepancy has come to be noticed through RTI filed by him, he said, adding that as the state government always claimed of corruption free governance, there is high expectation and hope that authorities concerned would surely take action against him and remove him from the said post. 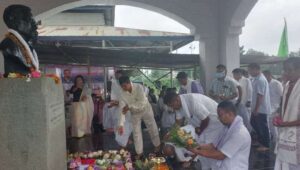 Mammoth tributes were paid to Arambam Somorendra during the observation of his 22nd death anniversary by the people of Manipur at various places and functions organised in his memory particularly his memorial complex, at Salanthong, Khurai Nandeibam Leikai in Imphal East on June 10. Prayers and floral tributes, presentation of songs and recitation of poems written by him mark the event.

Reports said commemorating the contribution made by patriotic leader Arambam Somorendra for the betterment of Manipur society during his lifetime, the Social Standard Club (SSC), Khurai Nandeibam Leikai organised a programme at the memorial complex. The programme began with a two-minute silence observation. It was followed by singing of popular patriotic song Chaikhre Ngasi Nangi Loubukta written by Somorendra.

The Judicial Magistrate First Class, Imphal East has returned an extrajudicial killing case to the CBI for further investigation by rejecting the closure report of investigation submitted by the investigating agency.

The CBI had submitted the closure report of extrajudicial killings of seven persons namely, Oinam Anand, Oinam Pakpa aka Maipaksana, Laishram Bocha, Chingangbam Gogo, Sinam Ratankumar, Thangpao Kipgen and an unidentified person on the intervening night of October 31, 2009 and November 1, 2009 by personnel of 28 Assam Rifles at Andro Sanapat in Imphal-East district stating that during the course of investigation, conclusion of guilt beyond reasonable doubt could not be made against the security personnel. 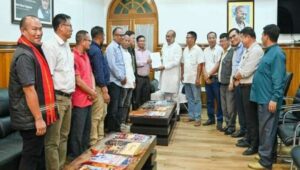 In what can be describes as a historic move, the Coordinating Committee on Manipur Integrity (COCOMI) and United Naga Council (UNC) have joined hands and unanimously resolved to fight together against continuous influx of migrants in the state. During a press conference at Manipur Press Club on June 5, Co-ordinator of COCOMI, Loitongbam Ratankumar said that there is constant influx of migrants from neighbouring countries, particularly from Myanmar and other states of India. Considering it a major reason to create demographic imbalance in the state and a threat to indigenous population, COCOMI and UNC resolved, after a series of meetings, to fight for it for the sake of future generations.

During a press conference at Manipur Press Club on June 5, Co-ordinator of COCOMI, Loitongbam Ratankumar said that there is constant influx of migrants from neighbouring countries, particularly from Myanmar and other states of India. Considering it a major reason to create demographic imbalance in the state and a threat to indigenous population, COCOMI and UNC resolved, after a series of meetings, to fight for it for the sake of future generations.

As an initial step, they jointly submitted a memorandum to Chief Minister Nongthombam Biren on June 4 which primarily focuses on implementation of rules and regulation on restriction of outsiders. He also informed that they had demanded adopting the National Register of Citizenship (NRC) to scientifically identify illegal immigrants, formation of State Population Commission and de-recognising of illegal and fake villages putting a cut-off base year, reports said.

IRAP ONLINE
PrevPreviousShould India be Concerned about the AUKUS Alliance? Has it Diminished QUAD’s Significance?
NextIn the new cold war China is not RussiaNext