RIMS Among India’s Top 50 Medical Colleges for Fourth Time; Schools to Shut till July 24; Assembly Session From July 25 to August 5; Many Organisations Demand for NRC

The Regional Institute of Medical Sciences (RIMS), Imphal has made it to the list of top 50 medical colleges in India as per the India Rankings 2022 under the National Institutional Ranking Framework by the Education Ministry for the fourth year.

The rankings were released by Union Education Minister Dharmendra Pradhan on July 15. It is for the fourth consecutive year that RIMS has been listed among the top 50 medical colleges in the country.

The news was announced by Manipur Education Minister Thounaojam Basanta Kumar and RIMS Director Professor Ahanthem Santa during the lamp lighting and oath-taking ceremony for passing out students of the College of Nursing, RIMS at the institute’s jubilee hall in Imphal on July 15.

RIMS Director, Prof. Ahanthem Santa expressed delight over RIMS performing with a better score in this year’s ranking. While the institute was ranked 46th among the top 50, he said that scores of many medical colleges decreased and the score of RIMS increased compared to past years. He lauded the staff for their dedication and commitment thereby making the institute among the top 50 medical colleges of India.

Following the COVID-19 positive cases in over the last few days surge and as precautionary measures, the State Education (School) Department has issued an order for closing offline classes with immediate effect.

In an order signed by the commissioner of education – school, Government of Manipur, H Gyan Prakash, it stated that there has been a recent increase in the absolute number of COVID-19 positive cases and the test positivity ratio is over 15 per cent in the state.

Children below 12 years of age are yet to be vaccinated, thus increasing their vulnerability to get infected by COVID-19 significantly. In consideration for the health safety of children, all the schools (government/government aided/ private schools/schools affiliated to CBSE) located in the state shall be closed for conduct of classes with immediate effect and shall remain closed till July 24 in public interest, the order stated.

In a government order issued earlier it was mentioned that the schools were scheduled to reopen after the holiday on July 16.

The second session of the 12th Manipur Legislative Assembly has been scheduled to be held from July 25 to August 5 with 11 sittings to be carried out for the whole session.

The schedule of the upcoming session issued by Manipur Legislative Assembly Secretary K Meghajit Singh mentioned that the budget estimation for 2022-23 will be presented. There will be sitting on Saturday though the state government had declared Saturday as holiday for state employees, it stated.

During the whole session, discussion for budget allocation for various departments will be discussed, as per the schedule. The second report of the Business Advisory Co will be presented on the first day of the session.

Earlier on July 8, Manipur Governor La Ganesan had summoned the second session of the 12th Manipur Legislative Assembly, stating that it will be held at 11 am on July 25 in the State Assembly Hall, Chingmeirong, Imphal.

During the first session of the 12th Manipur Legislative Assembly that was held in March, three sittings were carried out. A total of 54 MLAs were present in the treasury bench whereas five Congress MLAs and one independent MLA of Karong assembly constituency, J Kumo Sha were seen in the opposition bench, the release added.

Many Organisations Demand for NRC

In the memorandum, they have demanded for the implementation of the NRC in the state at the earliest and to open centres of operation for detection and deportation of foreigners. 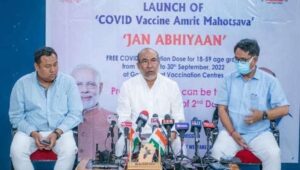 Manipur Chief Minister Nongthombam Biren on July 15 launched ‘COVID Vaccination Amrit Mahotsava’ in the state under which free vaccination of Covid precautionary dose will be provided to all 18 years and above for 75 days, with effect from July 15 to September 30.

“Launched the “Covid Vaccine Amrit Mahotsav” along with Hon’ble Ministers Shri S Ranjan Singh and Hon’ble Minister Shri L Sushindro Meitei today. Now, the Govt will provide free vaccination of precaution dose of covid vaccine to the 18 years & above for 75 days, starting today,” Biren also tweeted soon after the launch of the programme. 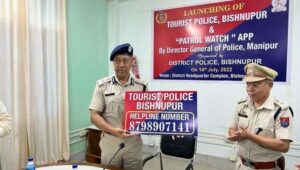 ‘Patrol Watch’ application is a Global Positioning System (GPS) based location tracking application which enables superintendent of police and gazetted police officers of the district to supervise real time deployment of police personnel on various duties.

One Arrested With Rs. 10 cr Opium 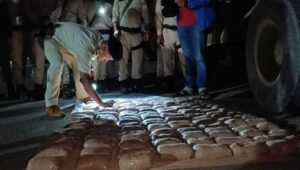 One man was arrested and 135.03 kg opium worth Rs 10 crore in the international market seized from his possession near Minuthong in Imphal West during a major operation conducted as a part of War on Drugs on July 12.

Superintendent of Police, Imphal West, Ksh Shivakanta Singh told media on July 13 that based on a tipoff, a team of district commando unit rushed to Minuthong area and intercepted a truck bearing registration number RJ19GG-0025 which was coming from North AOC towards Minuthong, near MMTA area at around 6.30 pm.

The High Court of Manipur on WednesdayJuly 13 directed the state government to form a separate Special Team headed by SP special commando Krishnatombi Singh to ascertain the whereabouts of convicted rapist Timothy L Changsang who has been absconding. Timothy was sentenced to rigorous life imprisonment for raping a 14-year-old girl under POCSO Act in May 2018.

A division bench comprising Chief Justice Sanjay Kumar and Justice MV Muralidaran directed to form a separate special team as no effective measures have been taken up till date to apprehend the convict, who has been held guilty of heinous offences and sentenced to life imprisonment.

The High Court opined that something more purposeful needs to be done by the state, in addition to pushing papers. 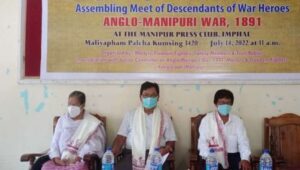 The Justice Committee on Anglo-Manipuri War, 1891 Martyrs and Freedom Fighters, Kangleipak said there were other heroes and not only Tikendrajit and Thangal General who died defending Manipur and said that the committee has identified 50 other heroes of Manipur.

“The justice committee will approach the state government for construction of statue of heroes and to include their stories in the syllabus till University level,” said justice committee chairman Yumnamcha Dilipkumar. Dilipkumar further informed of the findings during a meeting of all family members, descendants of war heroes of the Anglo-Manipuri War, 1891.

Dilipkumar, said that for many years they have been remembering few heroes of Manipur but they should also remember those who were exiled after the war to Andaman Island, such as Chongtham Mia who was never allowed to come back to Manipur and died in Tripura.

The Justice committee investigated thoroughly about the 50 other heroes of Manipur and found that five were hanged, 20 participated in the war, 23 were exiled to Andaman-Nicobar and one died in Bangladesh. In total, 50 heroes have been identified and their descendants have also been identified.

The Manipur Human Rights Commission (MHRC) on July 15 recommended the state government to pay compensation for illegal detention of two persons who were arrested and detained by state police on two different charges.

Two persons approached the Manipur Human Rights Commission (MHRC), pleading for justice and ensuring protection of their Human Rights. The MHRC, after deliberating the plea of both the persons arrested in two separate cases, found the charges levelled against them as illegal and directed the state police to pay compensation of Rs 50,000 each.

Of the two persons, one Yumkhaibam Bimol Meitei, was arrested by state police on charge of having nexus and for being an overground worker of proscribed group KYKL. But according to his daughter, Bimol was arrested for attending an election rally of Thounaojam Brinda, who was contesting the 12th Manipur Legislative Assembly Election from Yaiskul Assembly Constituency.

The other person, identified as Leishram Herojit, who is also the secretary of CADA (antidrug body) Thoubal district committee, was detained by the police and the MHRC termed it illegal.

The MHRC observed that Herojit was arrested and detained by the police without due process of law for organizing a sit-in-protest at Heirok Part II Mayai leikai against the acquittal of one Lukhosei Zou.

During the course of inquiry in the given facts and circumstances of the case, the commission is of the opinion that the arrest and detention of the said Laishram Herojit aka Shintha by the Police is not legally justifiable. “His arrest was not at all essential only on the ground of being an overground worker of a banned group without any prima facie evidence of alleged nexus with the said banned organization,” the MHRC stated.

The MHRC has recommended that a sum of Rs 50,000 each be paid to Yumkhaibam Bimol Meitei and Laishram Herojit by the state government within one month as interim compensation.