A massive rally was taken out in Kohima on December 17 which assembled at the Old MLA Hostel Junction for deliberations by various Naga civil society leaders to protest against the Oting massacre of 14 coal miners by Army special commandos in a botched up ambush based on grotesquely false intelligence on December 4 evening.

The larger gathering braved the winter cold to register their protest and show solidarity to the slain Konyak tribesmen, and in a unified voice called for justice and for the unconditional repeal of the Armed Forces Spceial Powers Act, AFSPA-1958.

Among those who spoke at the function were Kegwayhun Tep, President, Naga Students’ Federation. Prof. Rosemary Dziivichii spoke on “Pain of a Mother in the Conflict Zone” and Eno. Neingulo Krome, Secretary General, NPMHR, spoke on “Yoke of AFSPA”. Eno. T. Penthungo Lotha presented Bob Dylan’s iconic song “Blowing in the Wind” in solidarity to those who have borne the brunt of the draconian AFSPA. 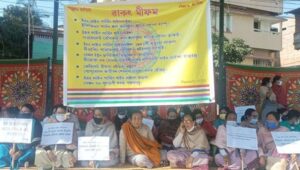 The Joint Committee on Inner Line Permit System (JCILPS) organised a sit-in-protest, demanding that its ‘6 points’ should be included in the inner line permit system, at the community hall of Keishampat Leimajam Leikai, Imphal West on December 14.

However, as the sit-in protest started, police personnel tried to disperse them while reminding them that they cannot conduct the protest as CrPC 144 had been imposed in Imphal West district. The police personnel asked some of the representatives of JCILPS, including its convenor BK Moirangcha to meet DC, Imphal West Th Kirankumar. After the negotiation, the protestors continued the sit-in-protest, reports said.

JCILPS had been demanding to include certain points in the ILP guidelines such as to identify who are the indigenous people; who are the permanent residents; to identify those persons who are settling in the state after 1951; prohibition of selling of land to non-locals under Bengal Eastern Frontier Regulation; to start immediate action after forming a population commission as per resolution taken by state cabinet; to take necessary action under ILP regulation section 20, reports added.

Before the Sit-in-Protest, JCILPS on December 13 stated that they will take up policing duty, if the government fails to initiate necessary steps under ILP regulation section 20.

The Communist Party of India, Manipur State Council of (CPI-MSC) on December 13 opposed the inclusion of Bir Tikendrajit International Airport of Imphal, Manipur among the 25 airports proposed for privatisation.

The CPI-MSC in a release stated that the Imphal International Airport has been lacking income owing to the interrupted air-traffic during the COVID-19 pandemic, it cannot be considered as non-profitable.

Accusing the BJP government for feeding off of the working class public to aid the wealthy private corporate owners, the CPI- MSC asserted that privatisation of the airport will result in increase of airfares and other inconsiderate policies. Comparing the BJP rule to a dictatorial rule, CPI- MSC stated the Imphal Airport which is a cherished commodity of the Changangei, Malom and Ningombam locals, cannot simply be sold to rich corporate owners for the profit of the BJP government, the release added. 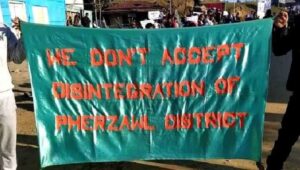 It may be mentioned that in 2016, the district was created with four sub divisions namely Pherzawl, Parbung, Vangai Range and Thanlon by the then Congress government of Chief Minister Okram Ibobi.

Report said some vested interest individuals had tried to amalgamate Pherzawl district again with Churachandpur district against which a public rally was held in the presence of Village Authority members and elders of the society.

However, the people do not want disintegration of the district as shown by the placard that read ‘we want unity in Pherzawl’. 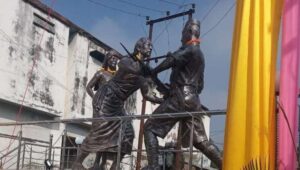 In commemoration of the Manipuri women martyrs of Nupi Lan which took place on December 12, 1939, a state-level Nupi Lan observation was organised by paying floral tributes at Nupi Lan Complex, Imphal.

Reports said Chief Minister Nongthombam speaking on the occasion as Chief Guest announced that a sum of Rs 1.30 crore has been kept reserved in the budget to renovate the present Nupi Lan Memorial Complex with modern facilities.

For the welfare of women, the state government has been taking various initiatives including providing financial assistance to the women vendors, women street vendors and others. “Women of the state had been doing so much and suffering a lot to save Manipur, and the time has come to give them a peaceful life,” he said.

He further said the state government is planning to organise Nupi Lan observation without blocking the National Highway-2 in the coming year ahead. From next year, the formal function may be organised near Sahid Minar ground though floral tributes are paid at Nupi Lan memorial complex, he added. 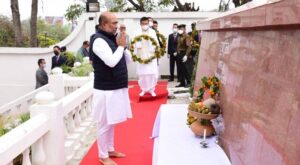 Manipur on December 12 paid rich tributes to the brave Manipuri women who fought for justice against the British colonial rulers and monopolistic trade interests in the Nupi Lan of 1904 and 1939. Remembering the epic struggles of Manipuri women, 82nd Nupi Lan Day Organisation Committee observed the day at JN Dance Academy, Imphal.

During the observation, convenor of 82nd Nupi Lan Day Observation Committee Lourembam Nganbi said that the day is observed every year to pay respect and tribute to the women of Manipur who fought against the British and their policies.

She narrated that in 1904, thousands of women gathered spontaneously and marched towards Maxwell’s official residence. They were assured that the order would be reconsidered; however, it all came to naught. Hence, on October 5 that year, around 5,000 women gathered at Khwairamband Bazar in protest, refusing to move till the order was retracted.

What started in the year 1939 as an agitation by Manipuri women against the oppressive administrative and economic policies by the then Maharaja of Manipur and the political agent Mr. Gimson (British Government 1933-45) later evolved into a revolution for administrative and constitutional reform in Manipur, Lourembam Nganbi said.

Since then, Manipuri women have bravely led protests across the years – be it the Meira Paibi movement in the 1970s against drug abuse and alcoholism or the 12 women standing nude in 2004 against AFSPA. There have been other women-led movements across the country as well, but Nupi Lan remains a strong testament to the power of women’s voice in India, she added.

“India Follows Military Rule behind the Curtain of Democracy” Meghen 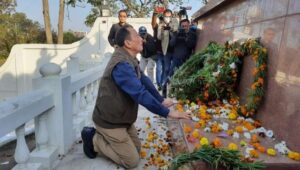 Condemning the Mon firing incident which killed 14 civilians by the armed forces, Former Chairman of United National Liberation Front (UNLF) RK Meghen aka Sanayaima said that the government needed to act on it concerning the sentiments of the public.

He said this to the media after paying tributes to the martyrs of Nupi Lan at the Nupi Lan Memorial Complex on December 12 remembering the day in 1939.

To my knowledge, around 2,000 civilians have been killed so far in fake-encounter cases and it is unfortunate.  These incidents are unacceptable, he further said, adding, “When I was Chairman, our group never attacked any security forces in civil dress or when they were with their family members.”  Killing of civilians in the name of suppressing the militants groups is not at all acceptable, he added.

“Such nature clearly shows that India follows military rule behind the curtain of democracy,” he alleged, adding the government needed to act as per the sentiment of the people and repeal AFSPA from Manipur.

Remembering Nupi Lan, he also said that Manipur is still facing economic imperialism as the Government of India still retains it as a ‘captive market’ by not giving any option of trades with the neighbouring country.

The struggle of Manipur women in the fight against poverty is an everyday phenomenon, and they have been spearheading in tackling every issue of Manipur, said Meghen adding, “I salute their struggles.”

Five PLA Members Brought Back to Manipur From Myanmar 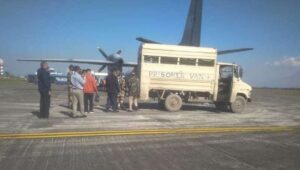 At least five members of the proscribed People’s Liberation Army (PLA) outfit of Manipur who were reportedly arrested by the Myanmar Army and kept imprisoned at Monywa in Mandalay, Myanmar were transported back into India. They were brought back in an Indian Air Force plane which landed at Bir Tikendrajit International Airport, Imphal around 11 am on December 15.

Reports said the prisoners, who were arrested in August last year, held ranks within the PLA of Revolutionary People’s Front (RPF). The five terrorists, who have given themselves military honorifics, have been identified as – Major Koireng, Major Angam, Major Banner, Captain Abi, and Captain Devan.

All the print and electronic media in Manipur observed a cease work strike for a day on December 16 in protest against the failure of the state government to clear government advertisement bills to various media houses.

The decision was taken by the Editor’s Guild Manipur (EGM) and Manipur Hills Journalists’ Union (MHJU) during a joint meeting held on December 15.

Earlier, the EGM and MHJU had served an ultimatum to the government to clear the pending bills by December 15. Some of the media houses in the state have not received outstanding dues for the last two years for advertisements published by the government, reports added.

Heroin Worth Over Rs 10 Crore Recovered from Indo-Myanmar Border 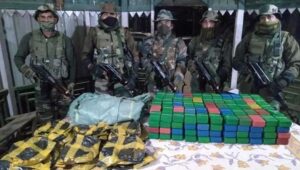 Troops of 43 Assam Rifles seized 2.7 kg of heroin powder worth around Rs 10.7 crore in the international market from a forest area bordering Myanmar.

Reports said that the troops recovered the illegal drugs from the forest area of Govajang village located near the Indo-Myanmar border on December 16 around noon. A border domination patrol of the Assam Rifles found a bag hidden in bushes along a track near Govajang village which leads to the Indo Myanmar border.

When the bag was checked it was found containing 220 soap cases of suspected heroin powder weighing 2.7 kg.  The recovered narcotics are assessed to be worth Rs 10.7 crore the narcotics were handed over to Moreh Police Station for further legal action, reports said.

While the entire hill districts of Manipur is under 12-hour total shutdown called by the All Manipur Tribal Students Union Manipur (ATSUM) from 5 am to 5 pm on December 18, the Joint Tribe Student’s Association (JTSA) and Thadou Inpi General Headquarters (Thadou Inpi GHQ) have decided not to participate in the total shut down.

The ATSUM stated in a release on December 16 that the shutdown has been called to demand the introduction of Hill Areas Committee (HAC) recommended ADC Bill 2021 in the Manipur Legislative Assembly.

The shutdown call is spearheaded by the ATSUM, the Kuki Students Organisation general headquarter and the All Naga Students Association Manipur.

Meanwhile, in a release, JTSA convenor Daichui Gangmei said that the decision to not participate in the total shutdown was taken in the “larger interest of the people especially during this festive season” after a prolonged deliberation on the issue.

“JTSA unanimously resolved, not to endorse the shutdown”. “It is hereby informed to general public to clear confusion, that there shall be a normal functioning of all day to day activities for both government and private establishments, National and State construction companies and NH-37 at the larger interest of the people in all JTSA Jurisdiction during the said shut down”, said the release of JTSA.

Moreover, Thadou Inpi-General Headquarters also said that it regretted to learn that ATSUM announced a total shutdown on December 18 in the entire hill districts of Manipur and a mass rally at Delhi in support of the controversial ADC Bill, 2021.

Thadou Inpi-General Headquarters, however, said that “to impose a shutdown during such an important festive time of Christmas is unwise and uncalled for as this is a time for people, particularly Christians, to go for Christmas shopping and do many other activities as they prepare and wait for Christmas celebration”.

V.D.Savarkar – Protagonist of the Hindutva Doctrine and Seed of Today’s Polarised India

Abstract: In the currently charged socio-political climate of the country, it is necessary to understand the thoughts, ideas and doctrines of the propagator of Hindutva