After a long wait since their induction to Chief Minister Nongthombam Biren’s Council of Ministers on April 16, portfolios have been allocated to the new six cabinet members on April 29, 2022.

According to a notification issued by the Chief Secretary Rajesh Kumar on April 29, the Tribal Affairs & Hills Department, and Horticulture & Soil Conservation Department have been allotted to Letpao Haokip while Dr Sapam Ranjan has got Medical, Health & Family Welfare Department, and Publicity & Information Departments.

Education Department which had been earlier allocated to Yumnam Khemchand has now been allocated to Thounaojam Basanta along with Law and Legislative Affairs Department.

A single bench of the Manipur High Court on April 25 heard the election petition filed against Minister Thongam Biswajit and two others, challenging Biswajit’s election as a member of the 12th Manipur Legislative Assembly, citing failure to disclose vital information in the minister’s affidavit.

The HC directed the registry to serve notice on the minister, JDU candidate Shanglakpam Preshorjit Sharma and returning officer of Thongju AC returnable within three weeks.

The petition was filed by Biswajit’s rival Seram Neken who contested as the candidate of the Indian National Congress.

On the same day, April 25 another single bench of the Manipur High Court heard the election petition filed against the sitting MLA of Lamsang AC Sorokhaibam Rajen and three others, challenging Rajen’s election as a member of 12th Manipur Legislative Assembly citing failure to disclose vital information in the MLA’s affidavit.

The HC directed the registry to serve notice to MLA Rajen, Likmabam Manibabu, Khundrakpam Kanba and Arambam Karamjit, against whom the petition was filed, within the next hearing of May 26.

The election petition was filed by his election rival and National People’s Party candidate Pukhrambam Sumati.

Moreover, a single bench of the Manipur High Court (HC) on April 28 heard the election petition filed against Kakching AC MLA Mayanglambam Rameshwar, challenging his election as a member of the 12th Manipur Legislative Assembly and improper acceptance of nomination of MLA by returning officer. The HC directed the registry to serve notice to M Rameshwar and fixed the next hearing on May 20.

The petition was filed by Rameshwar’s rival Yengkhom Surchandra, who contested as the candidate of the Bharatiya Janata Party (BJP).

On the same day, April 28 a single bench of the High Court of Manipur admitted the election petition filed by former Kshetrigao AC MLA Nahakpam Indrajit against present MLA Noorul Hassan, challenging the latter’s election as a member of the 12th Manipur Legislative Assembly.

The petitioner Nahakpam Indrajit stated that Noorul failed to disclose some of his bank account details in the relevant column of Para No 7A(ii) in his Form 26 affidavit on nomination.

A Myanmar national who was detained under NSA in 2019 for allegedly smuggling drugs and further detained under Foreigner Act after being released by the court in 2021, was granted bail by the High Court of Manipur on April 29. He was released on bail on furnishing a personal bond of Rs 1 lakh with two sureties in the like amount to the satisfaction of the Special Judge, (NDPS), Imphal.

Reports said the Myanmar national, Kyaw Kyaw Naing aka Abdul Rahim of Kawhmu village in Yangon, Myanmar was arrested by a team of Manipur Police, from the gate of the Imphal airport on September 24, 2019. He was arrested in connection with the seizure of a large quantity of drugs – World is Yours (WY) tablets – worth Rs 400 crore.

While releasing him, the HC stated that he should report before the Special Judge, (NDPS), Thoubal once in a week i.e. every Monday at 10 am until further orders; he should surrender his passport, if not already seized; he should not leave the country without permission of the Special Judge, (NDPS), Imphal; he should not involve in any act which will create a reasonable ground to assume that the petitioner is trying to create hurdle which will entail cancellation of his bail, reports added. 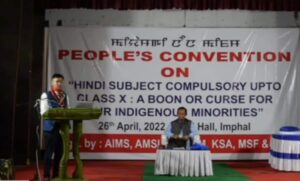 People’s Convention organised by six student bodies of Manipur has unanimously resolved to fight against the decision of the Union Ministry of Home Affairs to impose Hindi language as compulsory subject till Class 10 in all Northeastern states including Sikkim till it is withdrawn.

Reports said that the convention was attended by representatives of various civil voluntary organisations, learned persons and professors. They expressed their views, opinion in connection with the recent decision made by Union Home Minister Amit Shah to make Hindi as compulsory subjects till class 10.

After thorough discussion, the People’s Convention passed five resolutions unanimously. In the resolutions, they expressed their strong condemnation of the said decision and decided to oppose any kind of move or initiative taken up in regard with Hindi imposition.

The convention resolved to take various movements to preserve and promote dying dialects and languages of Manipur. The convention also demanded the implementation of policies and programmes of indigenous language promotion drafted under National Education Policy 2020.

The Convention also resolved to urge the state government to draft and implement state language policy and discuss the same in the coming Assembly Session. Besides demanding the translation of all books into Manipuri language, the student bodies also resolved that the state government should allow taking up dialect as optional subject if it is necessary as per situation.

During the convention, a committee was also formed to translate their resolution into action soon, reports added.

The Communist Party of India, Manipur State Council (CPI-MSC) on April 26 announced that the party will continue to protest against the price hike of petrol and petroleum products till May 9.

In a release, CPI-MSC stated that it has organised a state executive meeting at Irabot Bhawan. In the meeting CPI-MSC declared that the party will continue the protest which commenced from April 8, till May 9, it stated. While the price of petrol and petroleum products surge in India, even Sri Lanka, which had an economic crisis, charges much lower price for petrol and petroleum products.

Rather than the owners of small business owners and transport service providers, the public should blame the government for the rise in the price of services, the CPI release urged. 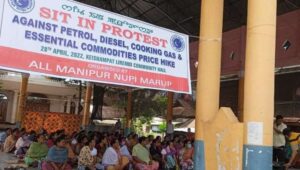 A sit-in-protest against the hike in prices of petrol and petroleum products was organised by the All Manipur Nupi Marup at the community hall of Keishampat Lairembi, Imphal West on April 28.

The protest was participated by All Manipur Nupi Marup state leader Meinam Ongbi Sakhi, president L Sumatibala, secretary S Sorojini, former presidents and district leaders along with around 500 women leaders from different constitutions of the women’s organisation, stated a release.

As part of the protest, a rally was also organised at which slogans such as ‘return the old price of petrol’ and ‘reduce prices of essential items’ were raised, the release added.

A double bench of Manipur High Court comprising Chief Justice PV Sanjay Kumar and Justice Lanusungkum Jamir on April 27 closed the Public Interest Litigation (PIL), seeking direction to the state to pay ex-gratia assistance to the next of kin of the deceased who died due to COVID-19.

The PIL was filed by Keisham Pradipkumar, former member of Manipur Commission for Protection of Child Rights (MCPCR), seeking direction in accordance with the guidelines issued by the National Disaster Management authority and to make publication without further delay in the interest of the people of Manipur.

The PIL was closed with the observation that the petition has been satisfactorily addressed by the authorities as the state government is duly following the policy framed by the National Disaster Management Authority with regard to payment of ex-gratia of Rs 50,000 to the next of kin of deceased COVID-19 victims, reports added. 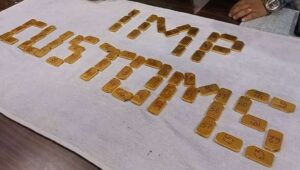 Altogether 115 gold biscuits worth Rs. 10.19 Crore were seized from two places – one from Imphal Airport and another at Thamnapokpi in Chandel District.

Customs Imphal Division has seized 50 gold biscuits weighing 8.3 kilogram worth Rs 4,43,95,200, allegedly smuggled by two youths in a moped at Thamnapokpi in Chandel district of Manipur.

Reports said the two alleged smugglers are identified as S Hemchandra, 26, son of late S Tompok of Khongjom, Thoubal and Charanga Phumtil Maring, 28, son of C Mothil Maring of Khunbi Tuinem, Chandel. Both have been arrested under the Customs Act, 1965.

The confiscated gold bars are suspected to be imported from Myanmar though there were no tags on the bars, added the assistant commissioner.

The court has directed the superintendent, Manipur Central Jail, Imphal to produce the convicts on May 5, 2022 for sentence hearing.

Meanwhile, on April 28, the Special Judge (NDPS), Bishnupur convicted a 51-year-old man for unauthorised possession of three kg of opium under section 18 (b) of the NDPS Act, 1985. 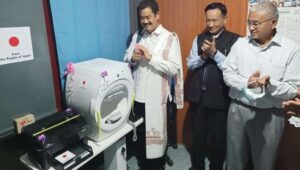 The Shija Foundation on April 27 inaugurated its new eye medical equipment donated by the Embassy of Japan at Shija Hospital in Langol, Imphal West.

Reports said the donation has been provided under the GGP (Grant Assistance for the Grassroots Projects) Scheme of the government of Japan as a part of its Official Development Assistance Scheme to developing countries around the world.

The donation has been given to Shija Foundation as a token of friendship between Japan and India from the people of Japan, said minister of Economic and Development, Embassy of Japan in India Shingo Miyamoto who attended the inaugural function as guest of honour.

With the installation of these devices, early diagnosis and intervention for glaucoma and DR patients in the state can be targeted and treated, said managing director of Shija Hospital Dr Kh Palin.

Presenting the activities of Shija Foundation, its consultant ophthalmologist Dr Sachindra Laishram informed that the foundation is contributing more than 50 per cent of the total cataract surgeries done in the state with around 2000-2500 cataract surgeries every year.

Following the court direction for investigation into the mysterious death of Ningthoujam Babysana, a student of Standard Robarth Higher Secondary School, Canchipur in Imphal West, the Central Bureau of Investigation (CBI) reportedly collected samples for DNA on April 28.

Reports said the CBI team arrived in Imphal a few days ago to collect the sample. Although the persons required to give the DNA samples were at Imphal, the team was waiting for late Babysana’s mother Kh Premica to arrive from Jiribam so that her sample could also be taken.

Premica arrived on April 28 and the sample for the DNA test was collected the same day by the Forensics Medicine department, RIMS.

It may be mentioned that the CBI had reopened the case for further investigation after the Chief Judicial Magistrate; Imphal West rejected the closure report submitted by the investigation agency recently. 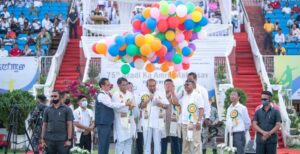 According to a release issued by DIPR, during the Sports Week which will continue from April 28 to 3, 2022, players and athletes from seven North East States including Assam, Arunachal Pradesh, Mizoram, Nagaland, Sikkim, Tripura and the host State Manipur will compete in select disciplines of Archery, Badminton, Boxing, Football and Table-tennis.

Speaking on the occasion, the Chief Minister Nongthombam Biren, welcoming all the participating players, expressed the hosting of seven North East States in the Sports Week as a proud moment for Manipur. He added that the sports week would celebrate the sporting spirit across all the North-eastern States and would also showcase the sportsmanship of our talented players in the select disciplines.

An extract of the book “CHINA BLOODIES BULLETLESS BORDERS”

“Delhi Police assures parents, elders and youth of the North East desirous to seek education or career opportunities in the National capital of complete safety

War is an organised murder and nothing else –by Harry Patch, last surviving soldier of World War I. Everywhere there is politics to gain or

Nuclear Winter Should Chill Every Leader to the Bone

By Simone Turchetti, University of Manchester in Manchester The consequences of a nuclear war have been well-explored by science. Beyond immediate death and destruction, a