Once Meitei’s biggest festival Ningol Chakkouba, which has been transformed as one of the biggest festivals of Manipur celebrated by other communities too that emphasises on strengthening ties of family especially between a brothers and sisters, was celebrated within and without Manipur where Manipuris settle on the second day of Meitei lunar month of Hiyangei falling on October 27 for this year 2022. 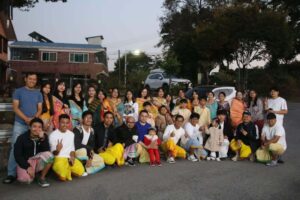 After a two years hiatus due to COVID-19 pandemic, Manipuris in Korea celebrated the much awaited Korea Manipuri Association (KMA)’s Ningol Chakkouba 2022 at a Pension house located at the picturesque foothills of Moaksan in Jeonju on the 22nd of October 2022 for convenience instead of October 27 as they are working there.

“Perfect weather, perfect people, perfect foods and perfect entertainment admist perfect naturisque of fall season made the celebration a complete and excellent gathering of the year,” KMA said on its Facebook page.

The breathtaking view captivated by the fall foliage due to seasonal changes was something no one could miss and Ningols’ traditional attires were merging with the nature for a perfect photography session.

The Jeonju team of KMA members hosted the gathering with full enthusiastic and good overall plannings. Manipuris living in all across South Korea thronged to Jeonju for celebrating the KMA’s much awaited Ningol Chakouba 2022. Everyone was excited and happy to meet after more than two years gap. Arriving at the pension, all were greeted with a light home-made Manipuri snacks and tea. The Pibas wholeheartedly prepared the Manipuri dishes and served the Ningols. The Ningols were even happier to enjoy the event, wearing Manipuri traditional attires and posing for the “lenses”. 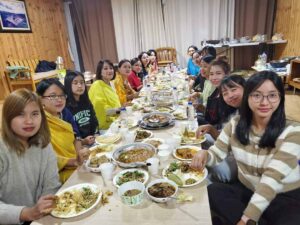 After enjoying the complete Manipuri Chakluk, which consists of Nga Ataoba, Nga Atoiba, Iromba, Singju, Ootti, Morok Achar, Pakora thongba to mention few, all sat down for a light moment. The evening programme was filled with fun and laugther, with Ningols special songs based on Chakkouba followed by Kids and Pibas entertaining performances.

The next day, after a good breakfast everyone visited Jeonbuk Museum of Art which is located few walks from the Pension House and bid adieu to all heading back to thier respective abode promising to meet again soon, KMA added.

Speaking as the Chief Guest at the inaugural occasion of the festival, Ranjan said that the state government has been trying to improve health infrastructures at remote and far flung areas. He continued that Primary healthcare system is being given due importance since it is at the base and a platform for the tertiary health care system, reports said.

Minister Ranjan maintained that the local people should have a sense of belongingness. The newly constructed Shingkap Primary Health Sub Centre (PHSC) is constructed under the fund from the Directorate of Minority Affairs. The minister assured to provide the required furniture and manpower as soon as possible, reports added. 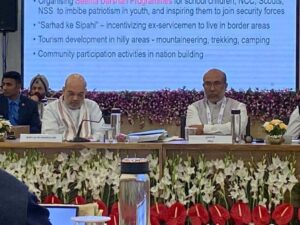 Manipur Chief Minister Nongthombam Biren who also holds home portfolio on October 27 attended the two-day Chintan Shivir at Surajkund in Haryana and highlighted the significance of the Manipur Government’s War on Drugs campaign among other matters.

Sharing his higlights Chief Minister Biren tweeted, “Apart from deliberating on various important matters, highlighted the significance of War on Drugs campaign of the State Government. The campaign has been playing a key role in restricting movements of illegal drugs to other states from the neighbouring countries.”

On the occasion, the Chief Minister Biren also expressed gratitude to Prime Minister Narendra Modi and Union Home Minister Amit Shah for their “strong support towards improving law and order” in the state.

According to the Union Home Ministry release, the two-day brainstorming session in Haryana was organised to prepare an action plan to implement ‘Vision 2047’ and ‘panch pran’ announced by Prime Minister Narendra Modi in his Independence Day speech.

Union Home and Cooperation Minister Amit Shah addressed the first day of ‘Chintan Shivir’ which continued till October 28, 2022. Chief Ministers of the States, Home Ministers of States and Lieutenant Governors and Administrators of Union Territories participated in the Chintan Shivir.

“This Chintan Shivir will provide a common platform to face challenges before the nation such as cyber-crime, spread of narcotics and cross-border terrorism in unison,” Amit Shah said in his address.

Union Home Minister Amit Shah on October 27 reiterated that security situation in Northeast India has improved significantly in the last eight years. He said since 2014 there has been a 74 per cent reduction in insurgency incidents, 60 per cent in casualties amongst security forces and about 90 per cent in civilian casualties.

“To formulate and implement this common strategy, the Government led by Prime Minister Narendra Modi, under the spirit of ‘Cooperative Federalism’, ‘Whole of Government’ and ‘Team India’ approach is promoting the 3C’s, that is Cooperation, Coordination, Collaboration between the Centre and the states,” Amit Shah said.

Amid fire crackers celebrating Diwali festival many people reportedly fired live bullets and from such gunfires, one stray bullet penetrated a galvanised roof and rhino ceiling and hit the bed of a residence in Imphal West around 7.30 pm on October 25.

Reports said the stray bullet left a hole on the mattress of the bed, making the family feel unsafe even inside their own home. The incident occurred at the residence of one Huidrom Dewan, 36, son of late Huidrom Ibopishak of Chingamakha Liwa Lambi, Maibam Leikai Bokul Makhong in Imphal West district.

The family members had an early dinner as they were planning to go out and see the Diwali lights. Dewan said as they were preparing for the night out, he was sitting on his bed and two children were also playing near him. When they were about to leave he heard a shattering noise and wondering if there were cracks on his bed, he checked around and found a bullet hole on his mattress just below his pillow. On further checking, he noticed that there was a hole on the ceiling and galvanised roof. Later, one bullet was found under his bed, reports added.

Luckily no one was injured but Dewan filed a complaint at Singjamei police station on the same day, reports added.

Though everyone expected to see a full-grown Sareng in the size of at least 3 to 4 kg after the Manipur government has taken up Sareng Project. However, it appeared that most of the Sareng were less than a kilogram at the cost of Rs. 1200 per Kg much higher than the imported iced Sareng.

In this regard speaking to the media on the sideline of the Fish Fair, Balkrishna Heisnam, Director of Fishery Department clarified that the Sareng weighing 3.5 to 4 kilograms have been kept for pisciculture purposes.

The successful selling of fresh Sareng in the fair is an outcome of the Sareng Project launched in 2021 under the initiative of Chief Minister Nongthombam Biren with the aim to revive the Meitei Sareng which was already extinct. 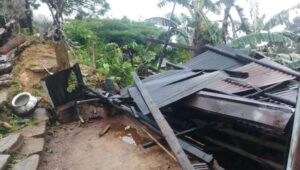 Manipur also had the impact of Cyclone Shitarang. Heavy storm coupled with rain destroyed many houses across Tamenglong district. Power supply was also cut off as heavy winds continued to blow for few days from the night of October 24.

Reports said the district was reeling under bad weather condition and several houses of the villagers in the district were destroyed by the heavy storm and rain in the night of October 24.

Deputy commissioner Tamenglong Pawan Yadav informed that in the preliminary report at least 20 houses were destroyed in the Tamei area and some houses in Tamenglong town area by the heavy storm.

One Out of 32 Dengue Cases Dies in Churachandpur District

District Malaria Officer Dr Liangoumuan on October 28 told mediapersons that one woman identified as Zamngaihvung, 59, wife of V Khangin, a resident of College Veng, Churachandpur HQ died due to dengue while 32 cases have been confirmed so far, reports said.

Preliminary testings were carried out and more than 60 suspected cases were detected and the cases are mostly from sub divisions like Singnat, Henglep, Saikot, etc. There could be more cases but authorities are unable to carry out extensive tests due to constraint of funds and the financial constraint has affected their fight against dengue, reports quoting the Malaria Officer said. 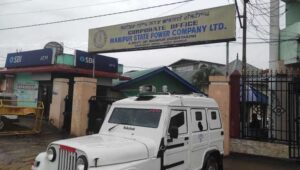 The office of the Manipur State Power Distribution Company Limited (MSPCL) at Keishampat and the residence of its Managing Director Nandeibam Sarat located at Thangmeiband Yumnam Leikai in Imphal West were raided by a probe team led by SP Shrey Vatts in the morning on October 24 in connection with a case of fund misappropriation allegedly by MSPCL officials.

Reports said the simultaneous raid began at 9 am and ended around 5 pm in the evening at the Thangmeiband Yumnam Leikai residence of the Managing director and at his office located at Keishampat.

The raid was a part of an investigation recommended by Manipur Lokayukta in the fund misappropriation case amounting to Rs 9,45,80,605 of MSPCL’s contract work for construction of 2×1 MVA 33/11 KV Sub-Station Chakpikarong along with the associated 33 KV line and related civil works on turn-key basis under NLCPR executed by Shyama Power (India) during the period from December 2009 to December 2015.

Subsequently, Manipur Lokayukta conducted a preliminary inquiry and found prima facie evidence against some officers. Accordingly, the Lokayukta recommended Shrey Vats to investigate the case by registering the case under Crime Branch Police Station on February 7, 2022.

However, MSPCL officers, including MD Sarat of MSPDCL approached the High Court of Manipur challenging the recommendation made by Manipur Lokayukta’s power and jurisdiction to make recommendations to MSPCL officials.

It also recommended that MSPCL Managing Director and two other general managers be removed from their posts or entrusted with the function or duties, till the completion of the investigation. 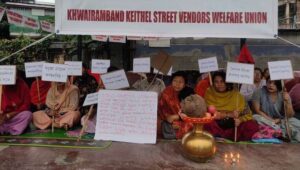 The Assistant Secretary of KKSVWU, L Nandita told the media that the union had apprised of the authority concerned on the challenges faced by the street vendors owing to the absence of proper vending space over the past few days. However, the authority (Imphal Municipal Corporation) failed to pay any attention.

Nandita said the department of MAHUD issued an order notifying all the street vendors to sell their products at the temporary market on a rotational basis. However, the market is already occupied by certain street vendors not registered with KKSVWU.

She explained that all the street vendors under KKSVWU have been depending on the three Nupi Keithels for the last many years and they are reeling under extreme hardship due to absence of proper vending space.

The KKSVWU appealed to the state to take up immediate measures to address the woes of the street vendors by identifying eligible street vendors and providing vending space, reports added.