Manipur’s 15-year-old judoka Linthoi Chanambam has become India’s first ever gold medalist in any age category and across genders at the World Cadet Judo Championships.

Linthoi showed glimpses of promise when she won Gold at the Sub-junior National Championships in 2018, reports added.

Linthoi, who is part of Indian Inspire Institute’s Judo Program since 2017, has been on several exposure trips with the guidance of the institute’s Judo Head Coach Mamuka Kizilashvili including camps at the University of Tsukuba, in Japan, Georgia and most recently in Bosnia and Herzegovina ahead of the World Cadet Championships, reports said.

In November 2021, Linthoi struck Gold at the National Championships held in Chandigarh, followed by another at the Asian Cadet and Junior Judo Championships, in Bangkok, in July.

“I really don’t have the words and cannot explain how I am feeling right now. I only know that I’m very happy with this victory, and I hope to build on this,” said Chanambam, after her feat.

Reports and twitter posts quoted Linthoi Chanamba as saying ““I cannot explain now how I feel but I know I’m very happy with this victory.”

Speaking during the inaugural event, Governor La Ganesan expressed his confidence that the state would keep on producing many more sportspersons both at the international and the national levels in the years to come. He said, “Youths, who are highly disciplined, physically fit, mentally alert, spiritually sound and loyal to the country are needed at this juncture, much more than any other time in the past.”

State to urge GOI to Enforce NRC In Manipur

Manipur Chief Minister Nongthombam Biren has assured members of the Coordinating Committee on Manipur Integrity (COCOMI) and the United Naga Council (UNC) to forward the resolution adopted by the Manipur Legislative Assembly for enforcing National Register of Citizens (NRC) in the state within August.

COCOMI Coordinator Longjam Ratankumar said that members of COCOMI along with the UNC called on the Chief Minister on August 26 to seek the status of the resolution adopted by the Manipur Legislative Assembly in its last session.

Members of the 12th Manipur Legislative Assembly on August 5 had unanimously adopted a resolution to work for implementation of NRC and to set up a state population commission to check the demographic imbalance caused by influx of illegal immigrants.  Thangmeiband constituency MLA Kh Joykisan had moved the private member’s resolution during the last sitting of the full budget session of the 12th Manipur Legislative Assembly.

Even as the War on Drugs 2.0 continues, arrest drug smugglers, seizures of drugs, busting of drug manufacturing labs are also reported and several civil organisations also continue to fight against alcohol-drugs menace in Manipur, Chief Minister Nongthombam Biren August 22 chaired a meeting of all senior police and law officials regarding War on Ddrugs issues in the state.

The Chief Minister has given strong instructions to the concerned officials to take up stringent measures to tackle drugs-related issues effectively, reports said.

The Chief Minister also tweeted: “Convened a special meeting of all senior police and law officials to discuss some critical matters regarding war on drugs. I have given some very strict instructions for dealing with all drugs related matters.” 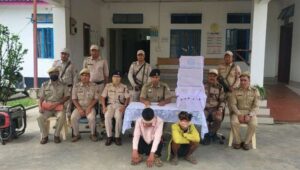 As a part of the ‘War on Drugs’ campaign, the Kakching district police arrested four people and seized heroin and opium worth around Rs 4.07 crore in the international markets on three different occasions.

Meanwhile, a different team of Kakching district commando unit led by sub-inspector Robindro Brown seized 10 kg of suspected Opium from a culvert of Sugnu Chakpikarong road near the Moltichan Village junction, Chandel district on August 24. The seizures were made from one Lunreilhing Baite, 30, wife of Thangkhogin Baite of Molngat Village, Chandel district, reports added. 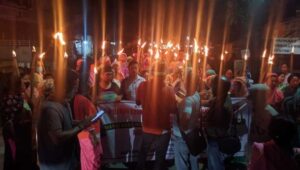 Meira paibis along with hundreds of people under the banner Poirei Leimarol, AMAWOVA, AMUCO and MSF took out a torch rally against the menace of drugs and alcoholism in the Manipuri society in Imphal on August 21.

Reports said the participants began the rally from Liwa Lambi, Singjamei in Imphal West and headed towards Hicham Yaicham Pat in Yaiskul. However, police personnel intercepted them at Chinga crossing and the rally was diverted towards Pishumthong. Later, they headed towards Heirangoithong and culminated at the starting point.

CADA Against Alcohols and Drugs 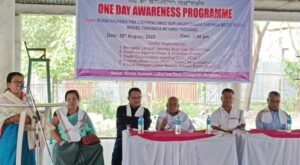 CADA stated in a release that it had organised a public meeting on the theme as a part of the organisation’s drive against drug abuse at Ima Chingjraoibi Sanglen at Khurai Konsam Leikai, Imphal East. 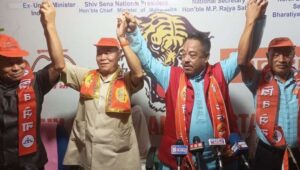 Manipur Shiv Sena president M Tombi on August 22 raised concern that organisations such as Coalition Against Drugs and Alcohol (CADA) and other local bodies are unable to stop the selling of alcohol in the heart of Imphal city and appealed to impose a strict ban on it.

Addressing the media at its state head office located at Babupara, he said that CADA and other local bodies had been conducting drives against alcohol but were unable to ban the selling of illegal liquor even near Raj Bhavan. He drew the attention of the Chief Minister Nongthombam Biren on the matter, mentioning that the present scenario should be monitored.

Union Minister of State for Railways and Textiles Darshana Jardosh on August 25 announced that 50 per cent of the Imphal-Jiribam railway project has been completed. She said the long coach passenger service to Khongsang will be operational by September.

Reports said the Union minister was speaking to the media on various ongoing projects taken up by the ministries of Railways and Textiles in Manipur at Hotel Imphal in Imphal East.

She said that the Northeast Frontier Railway (NFR) has started installing advance warning systems for disasters such as landslides in all trains and railway stations in Manipur for the safety of passengers and officials, reports added.

The development comes a month after the massive landslide that hit the NFR work site at Makhuam also called Marangching in Noney district. The tragedy claimed as many as 61 lives.

Gautam happens to be among the 46 teachers selected for the National Awards to Teachers 2022. President Droupadi Murmu will confer the awards to the selected teachers on the ocassion of Teachers’ Day, September 5 at Vigyan Bhawan in New Delhi.

Seven teachers from Northeast India states have been selected among 46 teachers.

The seven selected awardees from Northeast India included two from Sikkim and one each from Manipur, Nagaland, Meghalaya, Tripura and Assam.

From Manipur, Nongmaithem Gautam Singh, Teacher at Eastern Ideal High School, Imphal East will be honoured with the award.

The purpose of National Awards to Teachers is to celebrate the unique contribution of teachers in the country and to honour those teachers who, through their commitment, have not only improved the quality of school education but also enriched the lives of their students, the Education Ministry said in a statement. 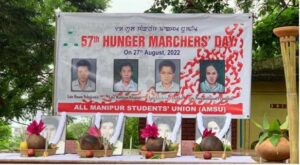 A massive rally participated by thousands of students and people in the state, marked the observance of 57th Hunger Marchers’ Day-2022 on August 27, 2022 in Imphal.

The Hunger Marchers’ Day rally was organised by the All Manipur Students’ Union (AMSU) in remembrance of the four martyrs, who laid down their lives for Manipur in the movement against artificial famine in 1965.

As a part of the observance, AMSU flag was hoisted at Pishum Chingamcha, Imphal West and participants paid floral tributes to four martyrs – Oinam Nabakumar, Laishram Chaobhal, Nongmeikapam Pramodini and Waikhom Nilamani, who laid down their lives on August 27, 1965 during the students’ movement demanding rice against artificial famine in Manipur. The students’ movement demanded a policy to prohibiting uncontrolled export of rice from Manipur which led to acute shortage of food grains and artificial famine in the state.

Several students came out in traditional attire to join the rally, which started from Maheiroisinggi Ningsing Khubham (Students’ Memorial Complex) at Pisum Chingamacha in Imphal West. The rally culminated at DM University campus, Imphal west and formal function was held there.

IRAP ONLINE
PrevPreviousIn any Assessment of a Conflict Situation, the Idea of Geography as Destiny Cannot be Ignored
NextShort Story/ ComraderyNext