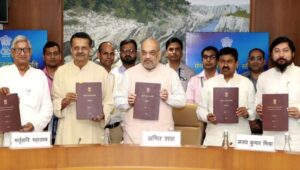 The Union Home Minister noted, “When citizens of states who speak other language, communicate with each other, it should be in the language of India. Unless we make Hindi flexible by accepting words from other local languages, it will not be propagated.”

Shah stressed on the need to give elementary knowledge of Hindi to students up to Class 10 and pay more attention to Hindi teaching examinations. The Union Home Minister informed that 22,000 Hindi teachers have been recruited in the eight states of Northeast India. Nine tribal communities of the Northeast have converted their dialects’ scripts to Devanagari, reports added.

A major clash broke out between the police and locals of Sora in Thoubal district, Manipur as the protest against the construction of Mega Food Park at 44-Yaithibi Loukol, paddy fields turned violent, leaving at least five locals and an Assistant Sub-Inspector injured and a police outpost and two vehicles were burnt down on April 8.

Reports said the protesting locals pelted stones and slingshots at the police, while the police opened fire in the air and countless rounds of teargas shells and threw mock bombs to disperse the protesting crowds and bring the situation under control.

An enraged mob also torched a temporary police outpost constructed at Sora Chinglak and a two-wheeler vehicle of a commando mobile unit at around 8 am on April 8. Both the outpost and vehicle were burnt down.

The locals alleged that the state government was attempting to grab lands in the name of constructing a Mega Food Park at 44-Yaithibi Loukol where a Masjid at Sora Ching Wangma and many houses will be affected.

The protesting locals have been blocking the Imphal-Moreh road at Sora area, along the National Highway 102, since April 7.

However, Manipur Chief Minister Nongthombam Biren Singh on April 8 said that the government provides proper compensation for any land acquired from the public, and urged people against illegal encroachments of land, including reserved forest areas and water bodies. 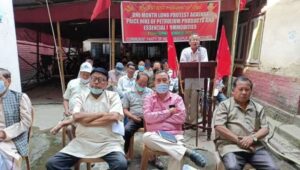 The Communist Party of India (CPI), Manipur on April 8 launched a month-long agitation demanding a cut in excise tax imposed on petroleum products. The party urged the government to fix minimum prices of essential items and to include petroleum products under the purview of GST listed items.

The CPI raised the demands as a part of its month-long agitation which began on April 8 at its office premises, Irawat Bhawan, Imphal. Addressing the media at the sideline of the protest, CPI State Secretary Laishram Sotinkumar said that with the advent of Bharatiya Janata Party (BJP) government, people have been experiencing only worse days despite the fact that it (BJP) had promised to bring better days.

Rather than thinking about the welfare of the common people, the BJP only focuses on promoting corporate groups, Sotinkumar alleged adding that it is clearly proven by the gradual privatisations of many public sectors, reports added.

Cop among 3 held with heroin in Guwahati

In an operation against a drug syndicate, the Directorate of Revenue Intelligence (DRI) seized 807.18 gram of Heroin concealed in 65 soap cases on April 5 in Guwahati. Three persons have been arrested in this connection, Joint Director, DRI, Guwahati Zonal Unit said in a press release. The value of the seized Heroin is estimated to be around Rs 5.65 crore in the international market, the release added.

As per the identity card of Md. Taslim Ahamad, he is a constable in the CID (Security) Office of the Manipur Police, the release added.

The arrested persons have been booked under the relevant provisions of the NDPS Act, 1985 and presently they are under judicial custody, it added.

MPCC for AFSPA abrogation from hills as well 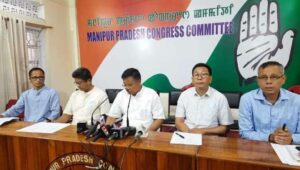 The Manipur Pradesh Congress Committee (MPCC) has demanded the state government to remove disturbed area status from hill areas of Manipur. It warned of several steps of agitation if the government failed to materialise their demand in the interest of the public.

During a press conference held at Congress Bhawan, in Imphal on April 5, former MLA from Henglep Assembly Constituency, Manga Vaiphei said that not removing AFSPA from a single segment of hill areas when it is withdrawn from 15 police stations located in valley regions is questionable.

Vaiphei said that there is peace in the hill areas as there is ceasefire agreement between NSCN (I-M) and government of India and Suspension of Operation (SoO) with Kuki-Chin Zoumi Groups too. Despite having better law and order situation in this hill region, not removing AFSPA even from a single segment of the hill areas is unfortunate, the former MLA said.

“Taking a big concern for the hill areas, Chief Minister N Biren Singh had launched ‘Go to Hills’, but why is the disturbed areas status removed only in the valley?” he questioned.

NE to be connected with selected international destinations

V K Singh, in his written reply, further informed that there are two international airports in the Northeast region – at Guwahati and Imphal – which are operated by the Guwahati International Airport Limited (GIAL) and Airports Authority of India (AAI) respectively, reports added.

‘Livelihood to Every Family’ planned

Chief Minister Nongthombam Biren on April 4 announced that a comprehensive survey will be carried out in 68 sub-divisions of Manipur with an objective to provide a source of livelihood to every family.

In a press conference held at CM Secretariat, he announced that the Chief Minister gi Hakshelgi Tengbang (CMHT) will be re-launched by raising the insurance cover to Rs 5 lakh per family.

Biren said that as a continuation of the ‘Go to Village’ mission, a survey will be carried out in 68 sub-divisions to identify the grievances of each family such as absence of gas connection, tap water, unemployment and so on. And in-charge called ‘pravari’ has been appointed for all sub-divisions to carry out the survey, he said.

Reports said under the appointed in-charge MCS officers, there will be MCS, Manipur Finance Service and Manipur Forest Service to incorporate the survey. Local leaders will also take part in the survey to make it more efficient. The survey report has to be submitted within two months. Based on that survey, a family that does not have any proper source of income will be provided a source of livelihood through a Start-Up Scheme and assisted with other government welfare schemes, the Chief Minister added.

Leishemba Sanajaoba brings up ‘ST Demand’ of Meiteis in RS 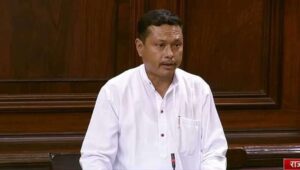 As a ‘special mention’ at the ongoing Parliament session, the matter concerning the demand to include Meitei/Meetei community in the Scheduled Tribe list under Article 342 (1) of the Indian Constitution was placed on the floor by Rajya Sabha MP Leishemba Sanajaoba on April 5.

Reports said MP Leishemba mentioned the issue during the evening session of Parliament. The Rajya Sabha MP informed the House that since 2013, a series of demands to include Meitei/Meetei under the Scheduled Tribe list had been made by forming different local bodies in Manipur.

MLA Losii Dikho has inaugurated the temporary shed of Mao Keithel at Kabo Leikai Nongchup on April 8. Speaking at the inaugural function Losii Dikho said that our State of Manipur is a beautiful place where different colours and sections of people are living in it peacefully by the grace of God, so even this Mao-Imphal market will not just be for business centre, rather it will built up a good relationship among the people living within the state.

He also said that with the blessing from God the soil of Mao is quite fertile, we harvest lots of vegetables, flower, fruits etc. As we all know that Mao is not a big area yet it contributes a lot for our state and even gave contribution to our neighbouring area like Kohima and Dimapur. Products are in much demand as the agriculture products are mostly organic, reports said.