Despite Ambitious Oxygen Plants at Hospitals and Government Claims of Adequate Oxygen Supply, Hospitals are Still Facing Shortage of Oxygen

Though not publicised at any forum it seems shortage of oxygen for treatment of Covid-19 patients has been discovered as there are reports coming out which are contrary to the state government’s claims of oxygen being available sufficiently.

RIMS has added capacity to produce up to 350,000 litres of medical oxygen daily, when its shortage has taken lives of many COVID-19 patients across the country, swept by the second wave of the disease. RIMS began oxygen production on April 24 at its manufacturing unit at Lamphelpat.

The director of RIMS, Prof. A. Santa said, “We have started to produce D-type oxygen (in Jumbo cylinders) since April 24 onwards.” Each Jumbo cylinder contains around 7,000 litres of oxygen and according to Santa, RIMS was producing enough oxygen daily from the atmosphere to fill up 40-50 such jumbo cylinders with the help of five Pressure Swing Absorption (PSA) Oxygen Generator Plants, installed recently to deal with any medical emergency in the landlocked state. “Each of these five generators can produce around 10 jumbo cylinders daily,” reports quoting Santa added.

It may be mentioned that the oxygen generator plants at RIMS were inspected by chief minister Nongthombam Biren on April 26. Earlier during the day, CM Biren had inspected another oxygen manufacturing unit at the state-run JNIMS hospital in Imphal.

Biren said inauguration of the oxygen plant comes as a relief for it could meet the oxygen requirements to a great extent, reports added.

The government was not sure in the beginning that an oxygen plant of such capacity could be installed within such a short period. However, with joint efforts and collective hard work of all concerned, it has become a reality now and it is like a dream come true at this critical juncture, Biren said.

Many of the hill districts would also have their own oxygen plants soon. In addition to this, another Cryogenic LMO plant of 20 KL capacity would be installed in Imphal at the earliest, he added. The chief minister further said the state now has around 4000 oxygen cylinders and over 1000 oxygen concentrators.

Manipur Chief Minister Nongthombam Biren on May 26 inaugurated the much-awaited PSA Oxygen plant in Churachandpur district amid an increasing demand for oxygen among COVID-19 patients. This is the first such oxygen plant in any of the hill districts of the state.

The chief minister Nongthombam Biren posting on his Facebook page said: “As promised six days ago that we will operationalise this plant within a week, I am happy to inaugurate the PSA oxygen plant with a filling 45-50 D-type oxygen cylinders per day at Churachandpur today.” 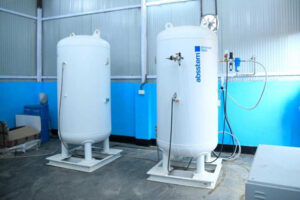 “I’m happy to inaugurate the PSA Oxygen Plant at Thoubal District which is capable of producing 22-25 D Type oxygen cylinders per day. This plant at Thoubal is the second PSA oxygen plant to be inaugurated after Churachandpur in the last one week,” CM Biren tweeted. 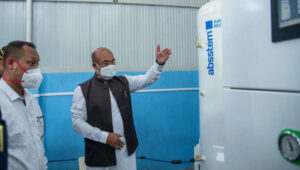 Reports quoting authorities of Thoubal District hospital said that attempts were made on May 1 night to provide medical oxygen from the newly inaugurated oxygen plant to 17 patients requiring oxygen at the Isolation Ward of the hospital. Alarms of the plant overloading its function went off when the oxygen was being provided to only 10 patients, hospital authorities said.

It may be mentioned that on May 31, CM Biren inaugurating the PSA Oxygen Plant at Thoubal District Hospital had assured that the newly constructed PSA oxygen plant would be able to provide additional oxygen supply to Covid patients from Thoubal and Kakching district.

On the other hand, despite the inauguration of an ICU with 10 ventilators at the district hospital, it is yet to start operations as the required physician and anaesthetist are yet to be provided, reports said.

Oxygen Plants in Every District

Meanwhile, Manipur Chief Minister Nongthombam Biren on May 31 assured that one oxygen plant each will be set up in every district in the state. The announcement was made during his visit to the three hill districts of Manipur – Ukhrul, Senapati and Tamenglong – to take stock of the COVID-19 situation.

Biren further informed that the state has approved a 1000 LPM PSA oxygen generator plant for Ukhrul through the Tribal Affairs and Hills department. The site for the same has been identified at the district hospital and the work will start soon.

In Senapati, Biren assured that an oxygen plant having a capacity of 200 cylinders per day would be set up soon.

In addition to the existing 246-bedded Covid Care Centre set up in Senapati, isolation ward at the district hospital would be increased from 15 to 37 beds, including 10 ICU beds, he added. More ventilators and ICU Monitor will be provided; he further stated adding that a 1000 LPM PSA oxygen plant has been approved for the district.

For Tamenglong, Chief Minister Singh promised an oxygen plant with a capacity to refill 100 cylinders daily.

In contrast to the media blitz over opening of Oxygen plants and government claims of adequate oxygen supply, the reality of shortage of oxygen surfaced as RIMS authority on April 29 announced cancellation of routine medical work by all departments from May 1 until further notice. The hospital said it was taking the decision in view of the acute shortage of oxygen and massive surge in the number of COVID-19 positive cases.

Superintendent of RIMS Hospital, Prof H Priyoshakhi Devi, stated that, ‘Due to an acute shortage of oxygen and the increasing number of COVID-19 patients in the hospital, routine work by all departments of RIMS shall be cancelled effective from May 1 until further notice’.

Notably, the RIMS and JNIMS stated that they are running short of oxygen supplies and are not in a position to cater to the needs of admitted COVID-19 patients.

This was stated by the hospital authorities in their affidavits filed before the High Court of Manipur in connection with a PIL filed by one Naresh Maimom. The PIL sought the court’s direction to procure sufficient oxygen and ICU beds for COVID-19 patients.

In this regard, the division bench of the Manipur High Court comprising Chief Justice Sanjay Kumar and Justice Kh Nobin on June 2 directed RIMS to approach the Audit Sub-Group of Medical Oxygen for securing required oxygen supplies, in terms of office memorandum dated May 19, issued by the special secretary (Health and Family Welfare).

The Manipur High Court has reiterated the inevitability of devising a long-term action plan for combating the potential third wave of COVID-19 pandemic.

“It would be necessary for the state to demonstrate the steps already taken, in terms of the demands raised for medical supplies and facilities, medicines and infrastructure; the steps taken to meet such demands; and also the plan for the future, in terms of the perceived demands that may arise for medical supplies and facilities, medicines and infrastructure and the steps that need to be put in place to meet such future demands, so that the state is not caught unprepared in meeting the challenges of another wave of this pandemic,” a Division Bench of Chief Justice Sanjay Kumar and Justice Kh Nobin Singh said.

The bench has asked the State Government to indicate the steps taken by it to put in place a “long-term plan” for meeting future challenges during the COVID-19 pandemic.

The first such direction was made by the High Court last year in a PIL titled J. Hillson Angam v. State of Manipur & Others.

“The government ought to constitute many committees of experts in respect of different problems relating to various Departments viz. Finance, Education, Health, Home, Agriculture, Horticulture, Industries etc. which will collect data, discuss with the stakeholders including CSOs and assess the impact of COVID-19 crisis taking into account the actions already taken by the state government under short-term plan,” it had observed.

On June 2, the Division Bench noted that till date medical colleges in the state are facing oxygen shortage.

“RIMS, Imphal, and JNIMS, Imphal, which are parties to this writ petition, have stated in their reply affidavits that they are running short of oxygen supplies and are not in a position to cater to the needs of admitted COVID-19 patients. This issue needs immediate attention,” the High Court order said.