There is a river inside all of us, a free flow of ideas, thoughts, borne out of our active minds, everyday attempts to catch the liminal spaces we inhabit. In the souls more attuned to inner life this river bellows, tumbles wildly, splaying tendrils, tasting forbidden fruits, unabated. Yet, in fertile minds this river becomes a source: of life-force, beauty, delicate sensations, hauntings; propensity to attend to pebbles under water; wonderment, self-reflexively, for one’s own feet, skin, sinews; of analytical urges, for figuring connections, yet to be formulated novelties. Creative artifacts become free floaters – reimagined/revisited/drawn upon. To recall the British poet John Keats’ figurative reference – chameleon poet, a shapeshifting entity, is relevant here. William D. Brewer expanded the interpretation of this figurative reference to creative process in Staging Romantic Chameleons and Imposters (2015) which makes it easier to understand that a chameleon poet is a creative artist, “autonomous of its surroundings, yet free or shackled, histrionic or passively impressionable, creative or derivative”.

S. Banesh’s deep dive into his own river, propelled by Joshy Joseph’s genre-defying film Walking over Water (Bangla title: Obhimani Jal) has resulted in a novel in Malayalam entitled Jalabhara Dinaraathrangal (Watery Days and Night), his first venture in fiction, and, yet another poet-illustrator, Soman Katalur, was provoked into creating images for the novel after reading it, but before viewing the film. The novel is not a written response to the film, therefore not an ekphrastic work, nor are the line drawings illustrations of the fictional writing. The film+novel+visual-art is what could be termed as multimodal combinatorial iterations — the frame story is developed, tangentially, from a film, to which another creative response uses the line art — a combination of creative responses of multiple actors, using multiple media, colliding, sometimes melding, refractive of each other (not reflective, not mise en abyme), admiring each other, but independent, unfettered articulations. Perhaps, because the film outlays an important peep into familial life, extending to the social, political and cultural lives of all of us in the contemporary times, while referring to the past, and a hat tip to the future – that these multimodal combinatorial iterations were activated.

Of course, there have been notable ekphrastic writings, attempted with such convincing success that only deeper research makes them discoverable. U.R.Ananthamurthy’s inspiration from Ingmar Bergman’s film The Seventh Seal (1957) in writing Samskara (1965), is a prime example. 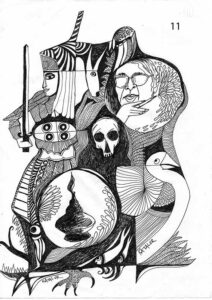 In the literary scenario, Vaikom Muhammad Basheer occupies an important place for using close observational style, for creating local characters and conjuring situations in sthalam (rooted in a place, location) Malayalam fiction. Basheer threaded his own experiences and autobiographical elements to great effect, for example, in The Walls. Banesh adds  a pertinent leaf in this rich literary tradition by channeling the zeitgeist, by expanding the location, wherein the protagonist in the fictional work is not a representational figure but an experiential medium for the writer and the readers. This central spine also constitutes a hybrid of historical and contemporary familial and illusionary relationships, political and social scenarios, which govern individual choices (even latently). At the moment when one starts believing in the fiction of naturalized order of self, family, nation and humanistic principles, an awakening awaits round the corner. The sharpness of Banesh’s analytics are threaded with lyricism, a hallmark of his aesthetic style which flirts with magic and logic, simultaneously.

Another artist, Mahasweta Devi, makes an appearance in the film, novel and most visibly in the drawings. Her presence is that of a muse – eliciting multiple responses from chameleon artists at work. But, she is herself a chameleon presence in these multimodal combinatorial iterations, also staging her independent performance, almost like a kenning in poetry – a reclusive presence. Katalur responds to this liminal presence of Mahasweta in his drawings, particularly for Chapters 2 and 11. But, dematerialized Devi is also an overhanging presence in the river Hooghly, she sits atop like an immersive viewer, sometimes overlooking from the Kolkata sky-line, sometimes as a binding cement for all the artistic iterations. She is the mothership, but she is also a disinterested witness.

Japanese filmmaker Yasujirō Ozu is present through the name of the protagonist, whose filmmaker father has named him thus. Through the filmmaker-father, a slice of history of Indian filmmaking consciousness makes an appearance too. Joshy’s multilingual and multi-perspectival filmmaking style makes appearances in Katalur’s lines, shades and shapes. 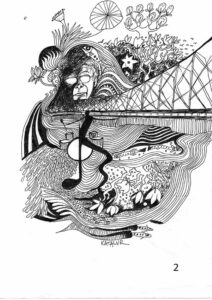 I will recall here my own collaboration with a group of British, Polish and American-Korean filmmakers for a short entitled, Most 72. All four of us worked simultaneously, at the same location, but separately. The footage and the audio were recorded in a single day on June 17th, 2013, on location, in Auschwitz-Birkenau (Poland), with post-production being completed within 72 hours: responses collided, visions blurred, memory being imperfect, traces of voices were marked and tagged along. It was an experiment to call attention to responses and thoughts unmarked by after-processes – a Chris Markerist proclivity, interacting with Deleuzian aspiration.

The magical klew which runs through Joshy Joseph, M.S.Banesh and Soman Katalur combines with multitudes of writers, poets, filmmakers, painters, visual artists, thinkers, cinephiles. This klew intersects political, cultural and social arenas of our lives. It flies across decades, jiving to the inner music of our daily lives. It tiptoes back into the river it germinated from, one begins to hear the water sing, the music spills over, our senses drift

The writer teaches Film Theory and Culture and Indian Literary Criticism at Panjab University, Chandigarh. She also writes poetry, and is actively engaged in film curating and filmmaking. email: surbhi.x@gmail.com