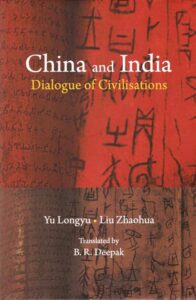 Translated from Chinese to English by Professor. B. R. Deepak

Chinese language has over 35,000 Sanskrit entries

Professor B R Deepak’s translated volume titled China and India: Dialogue of Civilizations opens a not much known but very significant amount of civilisational dialogue between India and China for the last two millennia.  China and India: Dialogue of the Civilisations is one of the volumes in the History of the Sino-Foreign Literary Exchange series (total 17 volumes) written by Professor Yu Longyu and Liu Zhaohua in Chinese. The 700 pages plus volume is a mind-boggling in- The first three chapters focus on the literary exchanges under the umbrella of Buddhism and cover issues such as the Sutra translation, influence of Buddhist literature on Chinese language and literature, the birth of China’s translation studies etc. The study reveals that in a span of 734 years starting from 10th year of the Yongping Era in Han Dynasty (67 A.D.) to the 16th year of Zhenyuan Era in Tang Dynasty (800 A.D.), in all 185 prominent translators translated 2412 sutras running into 7352 fascicles. It was in the process of sutra translation in China that more than 35,000 entries of Sanskrit were incorporated into Chinese language, and the language itself got transformed into a tonal and multisyllabic language since then. Various facets of Chinese literature, art, music, theatre and astronomy were influenced by the Indian culture, the imprints of which have been discussed in the study in detail.

depth study of the literary dialogue between the two Asian giants right from the dissemination of Buddhism to China till the present day. The book with prefaces by the translator and the authors, introduction, 16 chapters, a substantial postscript, and a long chronology of India-China interaction that incorporates reference books too, makes it a rich and invaluable reference repository.

The next three chapters (4-6) focus on the transmission of Indian fables, myths and theatre into China, dissemination of the Ramayana and Mahabharata and the adaptation of certain contents from these into Chinese and Buddhist literature is quite interesting.  Three Jataka stories – King Dasharatha, Monkey King, and Shambuka the earliest and most conclusive texts of dissemination of the Ramayana to China are discussed. All narrate Ramayana but in Buddhist setting; tweaking with the characters, and time and place has certain digressions, which is a phenomenon that can be traced to the Indian subcontinent as well as Southeast Asia.

The focus of next five chapters (7-11) is on the leading Indologists of China and their research on India’s classical and modern literary works. It starts from the translation of Tagore in China, and then discusses the contribution of Padma Bhushan Ji Xianlin, Xu Fancheng, Jin Kemu, Huang Baosheng and Liu Anwu to the India-China literary dialogue and cultural exchange of contemporary times. Some of the names may be known in India, however, the contribution of Xu Fancheng who spent 27 years in Sri Aurobindo Ashram and happens to be the first Chinese to translate the Upanishads remains buried not only in India but also in China for a long time. At the end of these chapters the research of contemporary Chinese scholars on India is also given as an appendix. These are the scholars who continued the fine tradition of sutra translation in China; the translation and publication of Bhagvad-Gita in the 1940s, Upanishads in the 1950s, Kalidasa’s Abhijnanashakuntala and Meghaduta in the 1950s and 1960s, the Ramayana from Sanskrit in the 1980s, Ramcharitmanas in 1988, Rabindranath Tagore’s works in 24 volumes in 2000, the complete Mahabharata from Sanskrit in 2005, various editions of Manusmriti; Sursagar and Kabir Granthavali in 2018-19 testifies this. Apart from the scattered translation of the Vedas, it could be said that China has translated almost the entire repository of mainstream Indian literature and philosophy including the Panchtantra, Kathasagar, Six philosophical Schools of India, and Shankracharya into Chinese.

Chapters 12 and 13 make a good case study of the Chinese studies in India and the contribution of Tan Yunshan and P. C Bagchi towards the same. Chapter 14 expounds Osho’s contribution towards popularizing Laozi and Zhuangzi or say Taoism in India and beyond. It also talks about the once Osho phenomenon in China. Chapter 15 is on China in Raja Rao’s writings, and the last chapter discusses the kind of work being done in India and China by the present generation of Indian Sinologists and Chinese Indologists.

The chapters also delve into the kind of Indian literary works that have been researched by the Chinese scholarship. These include writers such as Bharatendu Harishchandra, Premchand, Yashpal, Mirza Ghalib, Mohamed Iqbal, Krishan Chander, Jai Shankar Prasad, Jainendra Kumar, Phanishwar Nath Renu, Bankim Chandra Chatterjee, Aurobindo, Osho, and it may not be possible to list them all here. What is interesting is that Chinese scholars have also studied and rendered in Chinese the Indian writings in Tamil and English. The works of Chinnaswami, Subramania Bharathi, Mulk Raj Anand, R. K. Narayan, Raja Rao, Bhabani Bhattacharya, Manohar Malgonkar, Arun Joshi, Khushwant Singh, Vikram Seth and Anita Desai have been extensively translated and studied. Even though the import of Indian films in China is limited, but the translation and dubbing right from Raj Kapoor’s Awaara to Amir Khan’s Dangal has gone unstopped as mentioned in the bulky chronology of India-China relations given at the end of the book.

Chinese scholarship has picked up works written not only in Sanskrit and Hindi, but also in Bengali, Tamil, Urdu and English. No wonder many universities across China are offering Hindi, Tamil, Bengali and Punjabi etc. languages at undergraduate and postgraduate level. The fine tradition laid down by stalwarts like Ji Xianlin, Xu Fancheng, Jin Kemu, Huang Baosheng and Liu Anwu has been kept alive by their students such as Wang Shuying, Jin Dinghan, Xue Keqiao, Wang Bangwei, Yu Longyu and Jiang Jingkui who in turn have trained a formidable team of young Indologists spread across China. Obviously, such capacity building is not possible without policy formulation, funding and support from the top. Conversely, in India we have to do a lot in term of building capacities in Chinese language and studies.

Deepak believes that through this translation, people on both sides of the Himalayas will have a better understanding of the cultural, literary and people to people relations between India and China. It will open new enquires for research and be beneficial for the researchers and students of India-China relations, literary studies, Buddhist studies, translation studies, comparative literature, oriental studies, and even studies on individuals such as Tagore, Ji Xianlin, Jin Kemu, Xu Fancheng, P. C. Bagchi, Tan Yunshan, Raja Rao, Osho and many more.

Deepak studied at Peking University, Beijing from 1991 to 1993 and again in 1996 studied as a Jawaharlal Nehru Fellow at the Chinese Academy of Social Sciences in Beijing. One of the five awards he received is the Special Book Award for Translation of Chinese Classical Poetry into Hindi by the Government of China, in 2011.

The book should be stocked by all universities and think tanks and must be made good and subtle use of by the government in diplomatic, political cultural and even military dealings. Like the Peoples Liberation Army, which makes much use of loudspeakers for propaganda along the Line of Actual Control, Indian Army should reciprocate similarly to convey in Chinese language some suitable material from this book.

The writer is editor WordSword Features. He is also a strategic analyst and former spokesperson, Defence Ministry and Indian Army, and can be contacted at wordsword02@gmail.

PrevPreviousDM University Gets New VC, Major Shaiza Killing Records Disappear, and CM Makes Appeal for Harmony
NextImpoverished Myanmar Has One of the Highest Maternal Mortality in the Southeast Asian RegionNext