The Joint Committee on Inner Line Permit System (JCILPS) has strongly opposed the 1961 base year for implementation of Inner Line Permit (ILP) adopted by the state cabinet, stating that it is against the base year given by the committee as decided in many people’s conventions.

The State Cabinet in its meeting held on June 22, at the Cabinert Hall of Chief Minister’s Secretariat, resolved to adopt 1961 as Base Year for determining “Native” status for implementation of Inner Line Permit System in the State.

Addressing the press at JCILPS office in Imphal on June 23, JCILPS Convenor Phulindro Konsam rejected the state cabinet resolution to adopt 1961 as the base year and suggested conducting a people’s convention as soon as possible to discuss more about the actual base year.

Reasoning the demand for 1951 as base year and rejection of Manipur Cabinet’s decision of 1961 as base year, the JCILPS convenor said that Manipur’s pass and permit system for exit and entry to Manipur was abolished on November 18, 1950 by the then Chief Commissioner of Manipur Himat Singh. Adoption of the Indian Constitution on January 26, 1950 is another reason for the vehement demand to choose 1951 as the cut off base year. The whole country of India had its census report starting from 1951 and therefore the demand to choose 1951 as the cut off base year. The National Register of Citizens (NRC) was also created in 1951. Another reason behind the demand to adopt 1951 as cut off base year is the fact that the first electoral roll was created in 1948. Again, it was in 1951 that the village population directory was created and this is the sixth reason for the insistence to adopt 1951 as the cut off base year, the JCILPS Convenor insisted. The population of non-indigenous people in Manipur is so huge that their number might have already reached the 10 lakh figure, he said.

“The state government’s decision of adopting 1961 as a base year is totally against people’s agreement, so a people’s convention will be held soon to deliberate the State Cabinet decision, and chalk out a course of action to persuade the State Government to withdraw the Cabinet decision in case the people’s convention again resolves to adopt 1951 as the cut off base year,” the JCILPS Convenor informed. 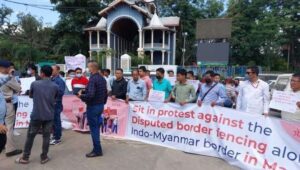 The United Committee Manipur (UCM) on June 23 has suspended its ongoing protests after the Manipur Government requested the Government of India (GOI) for suspension of the fencing works along the Manipur-Myanmar sector of Indo-Myanmar border.

UCM president Joychandra Konthoujam cautioned that intensified agitation will resume if further border fencing works are found to be continuing. He told the media on June 23 at the office of UCM at Lamphel in Imphal West that some politicians are taking advantage of the failure to bring an amicable solution in connection with the border fencing issue. 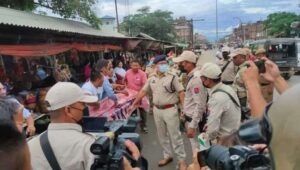 Reports said the journalist identified as 24-year-old Linda Mangsatabam, a reporter of evening vernacular daily Pandam got injured while police personnel led by the Porompat OC reportedly hurled a stun bomb directly at media persons who were covering the agitation. She suffered injuries on her right foot and was rushed to JNIMS Hospital for treatment and her condition was said to be stable, according to doctors at the hospital.

During the agitation, Secretary of District Affairs of UCM, Soibum Anil also sustained leg injuries; he was also hospitalised at JNIMS and is now in stable condition, reports said.

The protest was held as the government failed to bring an amicable solution to the state border issue after June 20. The UCM started launching agitations since June 21 (at the Kangla gate) as the government failed to respond to their demand. The UCM alleged that the BRTF has started taking up border fencing work within the territory of Manipur and not on the border. It demanded a clear-cut demarcation of the Indo-Myanmar boundary. 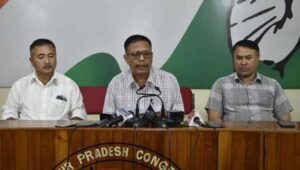 The Manipur Pradesh Congress Committee (MPCC) has demanded the state government to form a high-level committee to inspect, review all the disputed areas along the Indo-Myanmar Border. The MPCC also warned of launching various forms of agitations if the state government fails to translate their demand into action.

The MPCC Vice President Hareshwar Goshwami addressing the media at Congress Bhawan, BT Road on June 24 said that as a response to people’s movement, the state government writing to the Government of India to halt border fencing construction is appreciative. However, the state government focusing only on border pillar 80 and 81 is unfortunate as disputes also exist in other parts, he said.

Hareshwar further said that the total stretch of Indo-Myanmar border is around 395 km and out of this, around 35 km is still unclear. The disputed areas are border pillar 64 to 68 (Tuivang Molcham area), border pillar 75 to 73 (Howlenphai areas), border pillar 77 to 79 (Tumu Moreh) and border pillar 88 to 95. 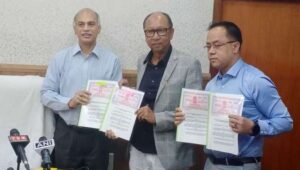 The Manipur government on June 20 signed two agreements for developing Moreh town as gateway to South East Asia and for preparing the GIS-Based Master Plan for the horizon year 2042, to provide urban amenities in all district headquarters other than Imphal East and West.

Reports said the agreement was signed between the MAHUD Department and the School of Planning and Architecture, Bhopal at the conference hall of MAHUD Minister Yumnam Khemchand at the Old Secretariat in Imphal West in presence of the minister.

Chief Minister Biren speaking on the occasion said that the pathetic condition of roads during the rainy season is due to blockage of drains due to encroachment and construction above drain at many areas by irresponsible sections of people. Therefore, the CM urged concerned officials to take up actions against those encroachers, adding that the state government had already taken up a mass drive for eviction of illegal encroachers at reserve forest areas and riversides for the larger interest of the people and younger generations, reports added.

Two Arrested With Drugs in Kakching

Teams of Kakching Police detected and seized 1.090 kg of suspected Heroin No 4 powder at around 11:20 am on June 20. The drugs were seized from a four wheeler (Maruti Suzuki Brezza, Maroon in colour) vehicle bearing Registration Number MN02B-1095 where the suspected drug was found concealed inside the fuel tank and the right side panel below the body of the vehicle.

Reports said the driver and the other occupant were detained. They were searched along with the said vehicle after observing legal formalities. From the vehicle, as many as 89 soap cases containing suspected Heroin No 4 powder were detected.

The suspected drugs were found to weigh approximately 1.090 kg in total. The driver and the occupants, namely Manglalmuon Gangte ,35, son of Paoneimang Gangte of Moreh Ward No II, Mission veng  in Tengnoupal district and Houminsem Singsong ,25, son of Henkhogin Singson of Zalenphai village, Moreh, Tengnoupal were arrested. Their vehicle and the suspected drugs were seized. It is estimated that the seized contraband drugs are worth Rs 23.98 lakhs in the local market and 2.39 crores in the international market, reports added.

A combined team of district commando, Bishnupur along with Nambol police station, seized 3.3 kg of opium at around 8.30 pm and arrested two drug peddlers near Leimaram Waroiching outpost on June 21.

One Arrested With Drugs Worth Rs 1.47 Crore

One person was arrested and 671 gm Heroin No 4 worth Rs 1.47 crore in the international market were seized on June 23.

Reports quoting Kakching police said one Hyundai i10 Magna (Grey in Colour) vehicle bearing registration No MN03A/0915 coming from Pallel side was given a signal to stop for checking at the gate of Pallel Police Station but the vehicle tried to escape the checkpoint by speeding the vehicle.

The driver of the vehicle was detained for verification. He has been identified as one Thangminlal Haokip, 22, son of Lhunkhopao Haokip of Yangoubung Village, Moreh, Tengnoupal district. From the vehicle, 50 soap cases containing suspected Heroin-No 4 powder were detected. The driver of the vehicle was arrested by observing all formalities. On weighing, the suspected Heroin powder was found to weigh approximately 671 grams in total, reports added.

The third anniversary celebration of Imphal Peace Museum was held at Maibam Lotpa Ching in Bishnupur District on June 23.

While speaking at the anniversary ceebration, Manipur Governor La Ganesan said Imphal Peace Museum at Maibam Lotpa Ching is a “sacred place” of Manipur, which is a hallmark of “everlasting peace and reconciliation” and bears testimony to the strong historical connection between Manipur and Japan.

“These sites need to be preserved and restored with proper memorials so that future generations can understand the sacrifices made from both sides while also spreading the message of peace and affirming that war benefits no nation,” La Ganesan said.

The Maibam Lotpa Ching or the Red Hills is a historic war memorial site of the Battle of Imphal, an important branch of WW-II that took place in Nambol, Manipur, he said lauding the efforts made by the Manipur Tourism Forum in establishing the Peace Museum, reports added.

Former President of All Manipur Working Journalist Union (AMWJU) Bijoy Kakchingtabam, 54 and AMWJU Standing Committee member Leimapokpam Shanjitkumar, 41 were arrested on June 24. The police have alleged that they were trying to recruit new cadres for the proscribed UNLF from Bishnupur area and send them to Myanmar, reports said.

Three mobile phones (two MI & one Samsung) and one Verna Car black in colour bearing regd. No. MNO6LA7696 were seized from them. The arrested persons along with the seized article are handed over to Bishnupur Police Station for taking further necessary legal action. Meanwhile, the arrested persons were sent to seven-day police remand, reports said.