Chief Minister Nongthombam Biren’s Cabinet has expanded to the fullest with six new ministers sworn-in on April 16 after the first six ministers including Chief Minister were sworn-in on March 21 as the Bharatiya Janata Party (BJP)-led government returned to power in Manipur for second term.

Manipur Governor La Ganesan administered the oath of office and secrecy to the six new ministers, of whom five are from the BJP and one from BJP’s ally Naga People’s Front (NPF).

Letpao Haokip who was National People’s Party (NPP) MLA from Chandel Assembly Constituency (AC) and a minister in the previous BJP-led government as a coalition partner and later joined the BJP few months before the 12th Manipur Legislative Assembly Election and elected from Tengnoupal AC this time on BJP ticket, and Thounaojam Basanta, a former IPS officer and son of former Union Minister Thounaojam Chaoba elected for the first time from Nambol AC on BJP ticket.

Of the five BJP MLAs inducted as ministers on April 16 Dr Sapam Ranjan, Leishangthem Susindro Meitei aka Yaima and Heikham Dingo were elected for the second time.

Khashim Vashum was elected for second time to the 12th Manipur Legislative Assembly from Chingai AC as an MLA of the Naga People’s Front (NPF). He is the second minister from the NPF in Nongthombam Biren’s Council of Ministers of BJP government in Manipur. Awangbou Newmai who was also a minister in the previous BJP government was amongst the first six cabinet ministers of Nongthombam Biren’s council of ministers sworn-in on March 21.

The expansion raises the cabinet strength to 12 with the BJP holding 10 ministerial berths including chief minister out of the 32 MLAs and NPF having two ministers out of its five MLAs in the 60-member house. 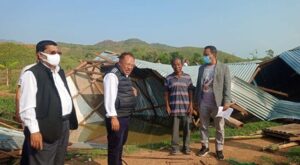 The thunderstorm that swept across the valley in the intervening night of April 14 and 15 has damaged a veterinary hospital, a pavilion in Wangoo, a community hall, around 208 houses in Pangaltabi and Chairel in Kakching district, Manipur.

The Southern Angami Youth Organization (SAYO) imposes “No Entry Restriction” in Dzuko Valley and Kezoltsa at Manipur-Nagaland border from April 13 till further notice saying it is as a precautionary measure against “encroachers” from Manipur till. 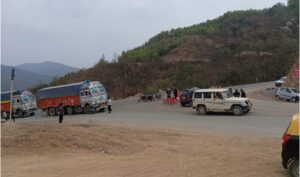 The apex youth body of the Southern Angamis, SAYO warned that failing to comply with the restrictions along the border, it will initiate its course of action against illegal trespassers.

Reports quoted SAYO President Metekhrielie Mejura, and gGeneral Secretary, Metevizo Sophie as having said, “Being the custodian of the Dzükou Valley and Kezoltsa, the SAYO will take all necessary steps to defend and protect its ancestral land.”

SAYO also lamented the imposition of Section 144 CrPC near the Nagaland-Manipur border by the District Magistrate (DM), Senapati District in Manipur through order No. DC (SPT) 16/17(L&O) 19 dated April 6. The tribal youth body said that the clamping of 144 CrPC has directly affected the land of Southern Angamis, reports added.

The statement said that the “incapacitated” action of the DM is unreasonable, misleading and provocative to the peaceful coexistence between the neighbouring villages, even as SAYO suspended the indefinite National Highway Bandh in its jurisdiction owing to the Golden Jubilee celebration of the Angami Public Organization (APO). 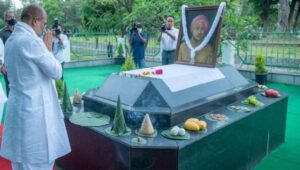 Manipur Chief Minister Nongthombam Biren on April 11 paid his tributes to Maharaja Nara Singh on his 172nd death anniversary at Kangla, the ancient Palace of Manipur in Imphal.

“Paid rich tributes to the gallant Maharaja Nara Singh on his 172nd death anniversary at Kangla today. During the First Anglo-Burmese War, soon after the 7 years devastation, his strong military acumen led to the defeat of the Burmese army by driving them beyond the Ningthi river,” Chief Minister Biren tweeted.

The Chief Minister said that the state government will build a befitting memorial tomb in honour of Maharaja Nara Singh’s contribution to the people of Manipur.

The Manipur Mid-Day Meal Workers’ Union (MDMWU) on April 11 rejected the state government decision to clear two-month honorarium of mid-day meal workers and said it would continue the ongoing cease work strike till all dues of 19 months are cleared.

“Where does the state government utilise the funds for the mid-day meal scheme? How will the state achieve the objective of the mission if it continues like this?” MDMWU Manipur president Y Indrani asserted while speaking to media persons in Imphal on April 11, reports said.

MDMWU Manipur has been demanding the government to disburse their pending honorarium of total 19 months. Condemning the delay in payment of their honorarium, the MDMWU Manipur started cease work strike since April 5.

Reports said the workers union would also like to know the genuine reason of not being able to pay their Rs 1,000 monthly honorarium and as to why they get only for 10 months in a year, Indrani enquired. 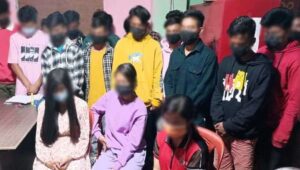 DESAM Assistant Secretary General Thoithoiba Nongthombam told the media at its head office located at Kwakeithel on April 10 that a video clip showing mass copying during examination on April 8 went viral on social media. He said the video was made by one of the students.

In connection with the video, around 25 students of Sagolmang Higher Secondary School, Sagolmang in Imphal East, including invigilator and other authority concerned of the said school were detained, reports said.

DESAM demanded that the Council authorities should investigate the matter and take appropriate action against the invigilator and authorities of the school for allowing mass copying.

The Report was released at Human Right Alerts – HRA Conference Hall at Kwakeithel Thiyam Leikai in Imphal on April 11.

The first round of Universal Periodic Review (UPR) was completed in 2011. Report of Government of India was earlier reviewed on April 10, 2008, wherein the governments of the UK, Germany and Canada raised the issue of Armed Forces (Special Powers) Act, and 18 recommendations were issued to India by the Human Rights Council.”

The second cycle of UPR was completed in 2012. India was reviewed again in May 2012. For that review, the office of the High Commissioner for Human Rights (CSCHR) placed three documents.

The CSCHR Manipur submitted its joint stakeholders’ submission report, ‘Broken Promises and Abdicated Obligations’ on the status of human rights in Manipur to the UN Human Rights Council for consideration during the examination of India in the third cycle of Universal Periodic Review on May 4, 2017.

Kwatha to be Organic Certificate Village

Devadutta who is also the project director of Manipur Organic Mission Agency (MOMA) was speaking to the media during the visit at Kwatha village by officials of Manipur Horticulture and Soil Conservation department, reports said.

During the visit, the team led by Devadutta discussed with the villagers on high demand products which will be suitable for farming in the soil in and around Kwatha village. The deputy director had also informed that they had assured the villagers of constructing a rural market shed very soon. Noting that plants like betel nuts, litchi, haribob, cashew nuts will be suitable for plantation in Kwatha, he said that the department will take up further research on it, reports added.

The department had come to an agreement with the villagers for trial of planting such plants in around five hectares areas in community farming method. In the later stage, the villagers of Kwatha will be registered as organic farmers under Mission Organic Value Chain Development of North East Region (MOVCD-NER) to make them start the process of organic farming individually. The fourth phase of MOVCD-NER will be introduced within the 2022-23 financial year, he said, adding that a total of 87 households of Kwatha Khullen and 15 households from Kwatha Khunnou will be registered under MOVCD-NER, reports added. 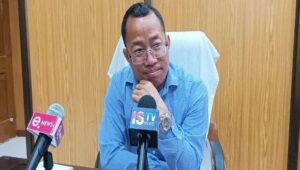 Dinganglung Gangmei aka Dipu Gangmei was on April 12 elected as the new chairman of the Hill Area Committee (HAC) of 12th Manipur Legislative Assembly unanimously.

Dipu, who is a retired IAS officer, is the MLA of 54-Nungba constituency. He defeated senior Congress stalwart and former deputy chief minister Gaikhangam Gangmei with a margin of 3,786 votes by securing 14,464 votes in the 12th Manipur Legislative Assembly Election.

The resignation of D Gangmei as member of the Indian Administrative Service was accepted with effect from November 11, 2021. On January 7, 2022, D Gangmei was appointed as the new Joint Secretary (RD & PR) from his previous post of DC, Kakching.

In the case taken up by Manipur Lokayukta, it was alleged that the Autonomous District Council Tamenglong District had spent a sum of Rupees 18,02,30,072 for developmental works.

The Manipur Pradesh Congress Committee (MPCC) strongly condemned the arrest of advocate Sanoujam Shyamcharan, who is also the spokesperson of the party on sedition charge for allegedly using “foul and derogatory” words against Amit Shah on a local TV talk show in connection with the Home Minister’s announcement of making Hindi compulsory upto class 10 in the schools of the Northeast.

Reports said, in a press conference held at Congress Bhawan on April 13, spokesperson Rabi Khan termed the arrest of a senior citizen and a reputed person at midnight on a mere charge of using “derogatory term” as unfortunate. Shyamcharan is also the former general secretary of All Manipur Bar Association and a law practitioner, he said.

Rabi Khan questioned the intention of the police for taking such swift action on a mere charge filed by a BJP youth leader when it had on several occasions failed to take any complaint filed by the Congress party.

“For instance, the Congress had filed a complaint in the City Police station against BJP for attacking the Congress Bhawan gate during the election time. But not a single step has been taken up so far”, he added.

The Congress spokesperson said that the Supreme Court of India had already issued an order that FIR should not be filed against any professionals like doctors, advocates without any appropriate reason, reports added.

Manipur High Court has admitted the election petition against Wangkhei Assembly Constituency (AC) MLA Thangjam Arunkumar for allegedly not disclosing his assets and furnishing false and misleading particulars in his election affidavit. The petition is listed on April 18 for hearing.

The petition was filed by former minister and Bharatiya Janata Party candidate Okram Henry seeking a direction from the High Court to declare the election of Arunkumar as a member of the 12th Manipur Legislative Assembly from Wangkhei constituency as void and also to declare that the petitioner is duly elected in the 12th Manipur Legislative Election from Wangkhei (AC).

It further mentioned among others that the details of the correct value of the residential building in Delhi, details of the loan account and liability, and details of the business of Arunkumar’s spouse were also not disclosed in the affidavit.

An extract of the book “CHINA BLOODIES BULLETLESS BORDERS”

“Delhi Police assures parents, elders and youth of the North East desirous to seek education or career opportunities in the National capital of complete safety

War is an organised murder and nothing else –by Harry Patch, last surviving soldier of World War I. Everywhere there is politics to gain or

Nuclear Winter Should Chill Every Leader to the Bone

By Simone Turchetti, University of Manchester in Manchester The consequences of a nuclear war have been well-explored by science. Beyond immediate death and destruction, a